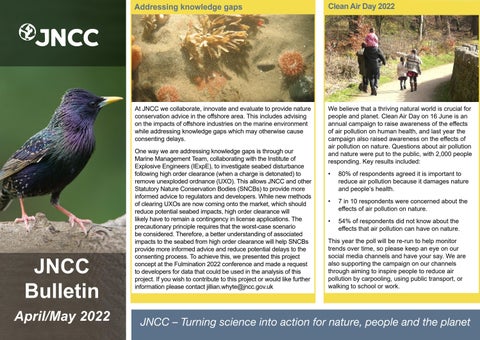 At JNCC we collaborate, innovate and evaluate to provide nature conservation advice in the offshore area. This includes advising on the impacts of offshore industries on the marine environment while addressing knowledge gaps which may otherwise cause consenting delays.

One way we are addressing knowledge gaps is through our Marine Management Team, collaborating with the Institute of Explosive Engineers (IExpE), to investigate seabed disturbance following high order clearance (when a charge is detonated) to remove unexploded ordnance (UXO). This allows JNCC and other Statutory Nature Conservation Bodies (SNCBs) to provide more informed advice to regulators and developers. While new methods of clearing UXOs are now coming onto the market, which should reduce potential seabed impacts, high order clearance will likely have to remain a contingency in license applications. The precautionary principle requires that the worst-case scenario be considered. Therefore, a better understanding of associated impacts to the seabed from high order clearance will help SNCBs provide more informed advice and reduce potential delays to the consenting process. To achieve this, we presented this project concept at the Fulmination 2022 conference and made a request to developers for data that could be used in the analysis of this project. If you wish to contribute to this project or would like further information please contact jillian.whyte@jncc.gov.uk

80% of respondents agreed it is important to reduce air pollution because it damages nature and people’s health.

7 in 10 respondents were concerned about the effects of air pollution on nature.

54% of respondents did not know about the effects that air pollution can have on nature.

This year the poll will be re-run to help monitor trends over time, so please keep an eye on our social media channels and have your say. We are also supporting the campaign on our channels through aiming to inspire people to reduce air pollution by carpooling, using public transport, or walking to school or work.

JNCC – Turning science into action for nature, people and the planet

JNCC plays an active role in providing advice to the UK Government to support commitments to the Convention for the Protection of the Marine Environment of the North-East Atlantic (OSPAR), which works to protect life in the sea. Our role includes supporting Defra at Biodiversity Committee (BDC) meetings, and through various intersessional groups and activities. JNCC staff recently attended the 2022 meeting of the BDC, held in Reykjavik, at the kind invitation of the Government of Iceland. The meeting provided a very welcome opportunity for parties to come together and build mutual understanding, trust and discuss different viewpoints. The meeting adopted a set of actions to continue the development of tasks to support the implementation of strategic objectives under the North-East Atlantic Environment Strategy, such as those relevant to the restoration and recovery of degraded habitats, review the progress of the biodiversity thematic assessments, indicators and integration methods for the assessments of good environmental status, progress with Marine Protected areas, and areas of cooperation with international organisations.

Congratulations Luis! Congratulations to JNCC CITES Licensing Support Officer, Luis Gustavo de Oliveira, who was runner-up in the Anglia Ruskin University Vice Chancellor’s Alumni Sustainable Champion award “in recognition and appreciation of his significant impact on addressing sustainability issues”. Luis was recognised for his work at TRAFFIC, investigating illegal wildlife trade in Latin America, for recently completed research assessing the protection status of all viper species in the Neotropical region, and for his work at JNCC providing advice as CITES Scientific Authority.

In conjunction with the devolved administrations, Defra Ministers recently appointed two new independent members to our Joint Committee – Catherine Denholm and Tom Meagher. Catherine Denholm is the Chief Operating Officer for the Equality and Human Rights Commission. She also served as Deputy Chair of NatureScot from 2019 to March 2022. She was awarded honorary membership of the Faculty of Public Health in 2020 and is Vice Chair of Impact Arts. Tom Meagher is a botanist and Professor and Chair of Plant Biology at the University of St Andrews. Tom is a former Trustee of the Royal Botanic Garden, Edinburgh and was previously a member of the Natural Environment Research Council and the Defra Science Advisory Committee. Our Joint Committee is a non-executive Board which brings together members from the nature conservation bodies for England, Scotland, Wales and Northern Ireland and independent members appointed by the Secretary of State for the Environment, Food and Rural Affairs to lead the organisation.

April/May 2022 edition of the JNCC Bulletin highlighting some of our recent projects and activities, both in the UK and internationally – all wrapped up in a short at-a-glance format that can be read on the go. This issue features investigating seabed disturbance following high order clearance to remove unexploded ordnance in the marine environment, Clean Air Day 2022 and the appointment of two new Joint Committee members 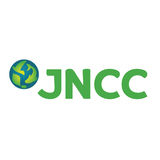