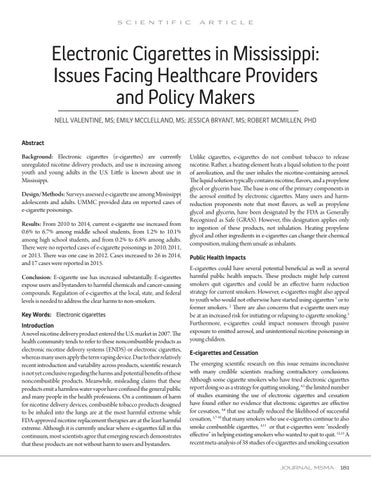 Electronic Cigarettes in Mississippi: Issues Facing Healthcare Providers and Policy Makers NELL VALENTINE, MS; EMILY MCCLELLAND, MS; JESSICA BRYANT, MS; ROBERT MCMILLEN, PHD Abstract Background: Electronic cigarettes (e-cigarettes) are currently unregulated nicotine delivery products, and use is increasing among youth and young adults in the U.S. Little is known about use in Mississippi. Design/Methods: Surveys assessed e-cigarette use among Mississippi adolescents and adults. UMMC provided data on reported cases of e-cigarette poisonings. Results: From 2010 to 2014, current e-cigarette use increased from 0.6% to 6.7% among middle school students, from 1.2% to 10.1% among high school students, and from 0.2% to 6.8% among adults. There were no reported cases of e-cigarette poisonings in 2010, 2011, or 2013. There was one case in 2012. Cases increased to 26 in 2014, and 17 cases were reported in 2015. Conclusion: E-cigarette use has increased substantially. E-cigarettes expose users and bystanders to harmful chemicals and cancer-causing compounds. Regulation of e-cigarettes at the local, state, and federal levels is needed to address the clear harms to non-smokers. Key Words: Electronic cigarettes Introduction A novel nicotine delivery product entered the U.S. market in 2007. The health community tends to refer to these noncombustible products as electronic nicotine delivery systems (ENDS) or electronic cigarettes, whereas many users apply the term vaping device. Due to their relatively recent introduction and variability across products, scientific research is not yet conclusive regarding the harms and potential benefits of these noncombustible products. Meanwhile, misleading claims that these products emit a harmless water vapor have confused the general public and many people in the health professions. On a continuum of harm for nicotine delivery devices, combustible tobacco products designed to be inhaled into the lungs are at the most harmful extreme while FDA-approved nicotine replacement therapies are at the least harmful extreme. Although it is currently unclear where e-cigarettes fall in this continuum, most scientists agree that emerging research demonstrates that these products are not without harm to users and bystanders.

Unlike cigarettes, e-cigarettes do not combust tobacco to release nicotine. Rather, a heating element heats a liquid solution to the point of aerolization, and the user inhales the nicotine-containing aerosol. The liquid solution typically contains nicotine, flavors, and a propylene glycol or glycerin base. The base is one of the primary components in the aerosol emitted by electronic cigarettes. Many users and harmreduction proponents note that most flavors, as well as propylene glycol and glycerin, have been designated by the FDA as Generally Recognized as Safe (GRAS). However, this designation applies only to ingestion of these products, not inhalation. Heating propylene glycol and other ingredients in e-cigarettes can change their chemical composition, making them unsafe as inhalants. Public Health Impacts E-cigarettes could have several potential beneficial as well as several harmful public health impacts. These products might help current smokers quit cigarettes and could be an effective harm reduction strategy for current smokers. However, e-cigarettes might also appeal to youth who would not otherwise have started using cigarettes 1 or to former smokers. 2 There are also concerns that e-cigarette users may be at an increased risk for initiating or relapsing to cigarette smoking.3 Furthermore, e-cigarettes could impact nonusers through passive exposure to emitted aerosol, and unintentional nicotine poisonings in young children. E-cigarettes and Cessation The emerging scientific research on this issue remains inconclusive with many credible scientists reaching contradictory conclusions. Although some cigarette smokers who have tried electronic cigarettes report doing so as a strategy for quitting smoking, 4,5 the limited number of studies examining the use of electronic cigarettes and cessation have found either no evidence that electronic cigarettes are effective for cessation, 4,6 that use actually reduced the likelihood of successful cessation, 5,7-10 that many smokers who use e-cigarettes continue to also smoke combustible cigarettes, 4,11 or that e-cigarettes were â&amp;#x20AC;&amp;#x153;modestly effectiveâ&amp;#x20AC;? in helping existing smokers who wanted to quit to quit. 12,13 A recent meta-analysis of 38 studies of e-cigarettes and smoking cessation

"the voice, the face, and the spirit of medicine in Mississippi" 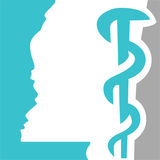