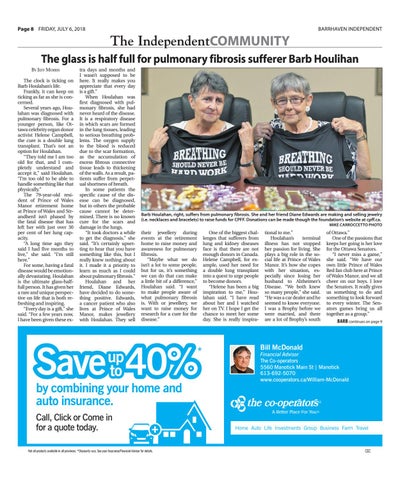 The IndependentCOMMUNITY The glass is half full for pulmonary fibrosis sufferer Barb Houlihan By Jeff Morris The clock is ticking on Barb Houlahan’s life. Frankly, it can keep on ticking as far as she is concerned. Several years ago, Houlahan was diagnosed with pulmonary fibrosis. For a younger person, like Ottawa celebrity organ donor activist Helene Campbell, the cure is a double lung transplant. That’s not an option for Houlahan. “They told me I am too old for that, and I completely understand and accept it,” said Houlahan. “I’m too old to be able to handle something like that physically.” The 79-year-old resident of Prince of Wales Manor retirement home at Prince of Wales and Strandherd isn’t phased by the fatal disease that has left her with just over 30 per cent of her lung capacity. “A long time ago they said I had five months to live,” she said. “I’m still here.” For some, having a fatal disease would be emotionally devastating. Houlahan is the ultimate glass-halffull person. It has given her a rare and unique perspective on life that is both refreshing and inspiring. “Every day is a gift,” she said. “For a few years now, I have been given these ex-

tra days and months and I wasn’t supposed to be here. It really makes you appreciate that every day is a gift.” When Houlahan was first diagnosed with pulmonary fibrosis, she had never heard of the disease. It is a respiratory disease in which scars are formed in the lung tissues, leading to serious breathing problems. The oxygen supply to the blood is reduced due to the scar formation, as the accumulation of excess fibrous connective tissue leads to thickening of the walls. As a result, patients suffer from perpetual shortness of breath. In some patients the specific cause of the disease can be diagnosed, but in others the probable cause cannot be determined. There is no known cure for the scars and damage in the lungs. “It took doctors a while to get the diagnosis,” she said. “It’s certainly upsetting to hear that you have something like this, but I really knew nothing about it. I made it a priority to learn as much as I could about pulmonary fibrosis.” Houlahan and her friend, Diane Edwards, have decided to do something positive. Edwards, a cancer patient who also lives at Prince of Wales Manor, makes jewellery with Houlahan. They sell

Barb Houlahan, right, suffers from pulmonary fibrosis. She and her friend Diane Edwards are making and selling jewelry (i.e. necklaces and bracelets) to raise funds for CPFF. Donations can be made though the foundation’s website at cpff.ca. Mike Carroccetto photo

their jewellery during events at the retirement home to raise money and awareness for pulmonary fibrosis. “Maybe what we do isn’t a lot to some people, but for us, it’s something we can do that can make a little bit of a difference,” Houlahan said. “I want to make people aware of what pulmonary fibrosis is. With or jewellery, we want to raise money for research for a cure for the disease.”

One of the biggest challenges that sufferers from lung and kidney diseases face is that there are not enough donors in Canada. Helene Campbell, for example, used her need for a double lung transplant into a quest to urge people to become donors. “Helene has been a big inspiration to me,” Houlahan said. “I have read about her and I watched her on TV. I hope I get the chance to meet her some day. She is really inspira-

by combining your home and auto insurance. Call, Click or Come in for a quote today.

Not all products available in all provinces. *Discounts vary. See your Insurance/Financial Advisor for details.

tional to me.” Houlahan’s terminal illness has not stopped her passion for living. She plays a big role in the social life at Prince of Wales Manor. It’s how she copes with her situation, especially since losing her husband to Alzheimer’s Disease. “We both knew so many people,” she said. “He was a car dealer and he seemed to know everyone. I was a Brophy before we were married, and there are a lot of Brophy’s south

of Ottawa.” One of the passions that keeps her going is her love for the Ottawa Senators. “I never miss a game,” she said. “We have our own little Prince of Wales Red fan club here at Prince of Wales Manor, and we all cheer on our boys. I love the Senators. It really gives us something to do and something to look forward to every winter. The Senators games bring us all together as a group.”