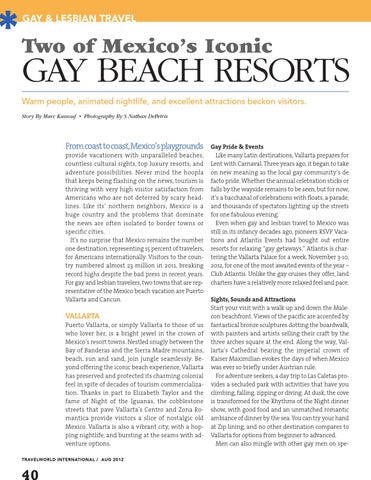 From coast to coast, Mexico’s playgrounds provide vacationers with unparalleled beaches, countless cultural sights, top luxury resorts, and adventure possibilities. Never mind the hoopla that keeps being flashing on the news, tourism is thriving with very high visitor satisfaction from Americans who are not deterred by scary headlines. Like its’ northern neighbors, Mexico is a huge country and the problems that dominate the news are often isolated to border towns or specific cities. It’s no surprise that Mexico remains the number one destination, representing 15 percent of travelers, for Americans internationally. Visitors to the country numbered almost 23 million in 2011, breaking record highs despite the bad press in recent years. For gay and lesbian travelers, two towns that are representative of the Mexico beach vacation are Puerto Vallarta and Cancun.

VALLARTA Puerto Vallarta, or simply Vallarta to those of us who lover her, is a bright jewel in the crown of Mexico’s resort towns. Nestled snugly between the Bay of Banderas and the Sierra Madre mountains, beach, sun and sand, join jungle seamlessly. Beyond offering the iconic beach experience, Vallarta has preserved and protected its charming colonial feel in spite of decades of tourism commercialization. Thanks in part to Elizabeth Taylor and the fame of Night of the Iguanas, the cobblestone streets that pave Vallarta’s Centro and Zona Romantica provide visitors a slice of nostalgic old Mexico. Vallarta is also a vibrant city, with a hopping nightlife, and bursting at the seams with adventure options. TRAVELWORLD INTERNATIONAL / AUG 2012

Gay Pride &amp; Events Like many Latin destinations, Vallarta prepares for Lent with Carnaval. Three years ago, it began to take on new meaning as the local gay community’s de facto pride. Whether the annual celebration sticks or falls by the wayside remains to be seen, but for now, it’s a bacchanal of celebrations with floats, a parade, and thousands of spectators lighting up the streets for one fabulous evening. Even when gay and lesbian travel to Mexico was still in its infancy decades ago, pioneers RSVP Vacations and Atlantis Events had bought out entire resorts for relaxing “gay getaways.” Atlantis is chartering the Vallarta Palace for a week, November 3-10, 2012, for one of the most awaited events of the year – Club Atlantis. Unlike the gay cruises they offer, land charters have a relatively more relaxed feel and pace. Sights, Sounds and Attractions Start your visit with a walk up and down the Malecon beachfront. Views of the pacific are accented by fantastical bronze sculptures dotting the boardwalk, with painters and artists selling their craft by the three arches square at the end. Along the way, Vallarta’s Cathedral bearing the imperial crown of Kaiser Maximilian evokes the days of when Mexico was ever so briefly under Austrian rule. For adventure seekers, a day trip to Las Caletas provides a secluded park with activities that have you climbing, falling, zipping or diving. At dusk, the cove is transformed for the Rhythms of the Night dinner show, with good food and an unmatched romantic ambiance of dinner by the sea. You can try your hand at Zip lining, and no other destination compares to Vallarta for options from beginner to advanced. Men can also mingle with other gay men on spe- 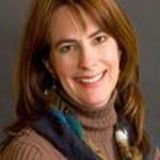