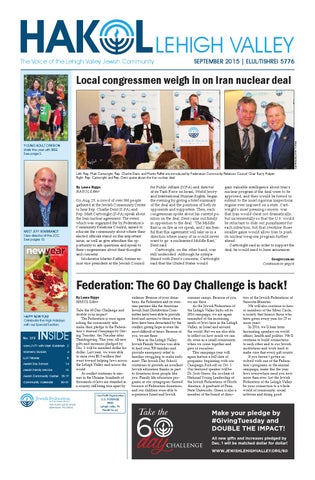 By Laura Rigge HAKOL Editor On Aug. 25, a crowd of over 300 people gathered at the Jewish Community Center to hear Rep. Charlie Dent (R-PA) and Rep. Matt Cartwright (D-PA) speak about the Iran nuclear agreement. The event, which was organized the by Federation’s Community Relations Council, aimed to educate the community about where their elected officials stand on this important issue, as well as give attendees the opportunity to ask questions and speak to their congressmen about their thoughts and concerns. Moderator Martin Raffel, former senior vice president at the Jewish Council

for Public Affairs (JCPA) and director of its Task Force on Israel, World Jewry and International Human Rights, began the evening by giving a brief summary of the deal and the positions of both its opponents and supporters. Then, each congressman spoke about his current position on the deal. Dent came out firmly in opposition to the deal. “The Middle East is on fire as we speak, and I am fearful that this agreement will take us in a direction where many of us would never want to go: a nuclearized Middle East,” Dent said. Cartwright, on the other hand, was still undecided. Although he sympathized with Dent’s concerns, Cartwright said that the United States would

gain valuable intelligence about Iran’s nuclear program if the deal were to be approved, and they would be forced to submit to the most rigorous inspections regime ever imposed on a state. Cartwright’s most pressing concern was that Iran would cheat not dramatically, but incrementally so that the U.S. would be reluctant to dole out punishment for each infraction, but that overtime those smaller gains would allow Iran to push its nuclear weapons program further ahead. Cartwright said in order to support the deal, he would need to have assurances

Federation: The 60 Day Challenge is back! By Laura Rigge HAKOL Editor

Take the 60 Day Challenge and double your impact! The Federation is once again asking the community take make their pledge to the Federation’s Annual Campaign by Giving Tuesday, the Tuesday after Thanksgiving. This year, all new gifts and increases pledged by Dec. 1 will be matched dollar for dollar. Last year, we were able to raise over $2.3 million that went toward helping Jews across the Lehigh Valley and across the world. As conflict continues to simmer in the Ukraine, hundreds of thousands of Jews are stranded in a country still being torn apart by Non-Profit Organization

violence. Because of your donations, the Federation and its overseas partners like the American Jewish Joint Distribution Committee have been able to provide food and services to those whose lives have been devastated by the conflict, giving hope in even the most difficult of times. Because of you, we are there. Here in the Lehigh Valley, Jewish Family Service was able to feed over 500 families and provide emergency relief to families struggling to make ends meet. The Jewish Day School continues to provide an excellent Jewish education thanks in part to donations from people like you. Family life education programs at our synagogues thrived because of Federation donations, and our children were able to experience Israel and Jewish

summer camps. Because of you, we are there. As the Jewish Federation of the Lehigh Valley kicks off its 2016 campaign, we are again reminded of the increasing needs of Jews here in the Lehigh Valley, in Israel and around the world. But we are also able to reflect on how much we can do, even as a small community, when we come together and give of ourselves. This campaign year will again feature a full slate of programs, beginning with our Campaign Kick-off on Oct. 1. Our featured speaker will be Dr. Josh Green, the co-chair of National Young Leadership of the Jewish Federations of North America. A graduate of Penn State University, Green is also a member of the board of direc-

tors of the Jewish Federations of Sarasota-Manatee. We will also continue to honor members of the Silver Circle, a society that honors those who have given every year for 25 or more years. In 2016, we’ll hear from fascinating speakers on world affairs, health and politics. We’ll continue to build connections to each other and to our Jewish institutions and work hard to make sure that every gift counts. If you haven’t gotten involved with one of the Federation’s programs or the annual campaign, make this the year. Jews everywhere need you now more than ever. Let the Jewish Federation of the Lehigh Valley be your connection to a whole world of community, social activism and doing good.

Make your pledge by #GivingTuesday and DOUBLE THE IMPACT! All new gifts and increases pledged by Dec. 1 will be matched dollar for dollar! WWW.JEWISHLEHIGHVALLEY.ORG/60