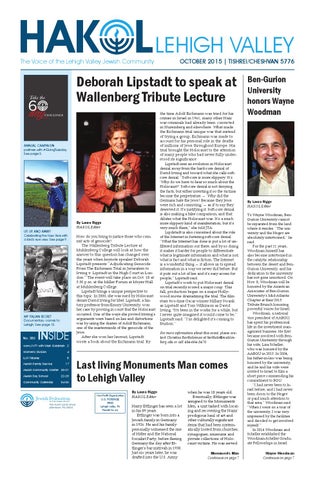 UP, UP, AND AWAY! Celebrating the New Year with a bird’s eye view. See page 9.

By Laura Rigge HAKOL Editor How do you bring to justice those who commit acts of genocide? The Wallenberg Tribute Lecture at Muhlenberg College will look at how the answer to this question has changed over the years when keynote speaker Deborah Lipstadt presents “Adjudicating Genocide: From The Eichmann Trial in Jerusalem to Irving v. Lipstadt in the High Court in London.” The event will take place on Oct. 18 at 3:30 p.m. at the Miller Forum at Moyer Hall at Muhlenberg College. Lipstadt brings a unique perspective to this topic. In 2000, she was sued by Holocaust denier David Irving for libel. Lipstadt, a history professor from Emory University, won her case by proving in court that the Holocaust occurred. One of the ways she proved Iriving’s arguments were based on lies and distortions was by using the diaries of Adolf Eichmann, one of the masterminds of the genocide of the Jews. After she won her lawsuit, Lipstadt wrote a book about the Eichmann trial. By

when he was 18 years old. Eventually, Ettlinger was assigned to the Monuments Men, a unit tasked with locating and recovering the Nazis’ prodigious haul of art and other culturally significant items that had been systematically looted from churches, synagogues, museums and private collections of Holocaust victims. He was served Monuments Man Continues on page 7

For more information about this event, please contact Christine Bartholomew at bartholo@muhlenberg.edu or call 484-664-3470.

By Laura Rigge HAKOL Editor Harry Ettlinger has seen a lot in his 89 years. Ettlinger was born into a Jewish family in Germany in 1926. He and his family personally witnessed the rise of Hitler and the National Socialist Party, before fleeing Germany the day after Ettlinger’s bar mitzvah in 1938. Just six years later, he was drafted into the U.S. Army

By Laura Rigge HAKOL Editor To Wayne Woodman, BenGurion University cannot be separated from the land where it resides. “The university and the Negev are absolutely intertwined,” he said. For the past 11 years, Woodman himself has also become intertwined in the catalytic relationship between the desert and BenGurion University, and his dedication to the university has not gone unnoticed. On Nov. 8, Woodman will be honored by the American Associates of Ben-Gurion University’s Mid-Atlantic Chapter at their 2015 Tribute Brunch honoring powerful voices for Israel. Woodman, a national vice president of AABGU, has spent his professional life in the investment management business. He first became involved with BenGurion University through his wife, Lisa Scheller, who was honored by the AABGU in 2013. In 2004, his father-in-law was being honored by the university, and he and his wife were invited to Israel to film a short piece commending his commitment to BGU. “I had never been to Israel before, and I had never been down to the Negev or paid much attention to that area,” Woodman said. “When I went on a tour of the university, I was very impressed by the facilities and decided to get involved myself.” In 2014 Woodman and Scheller established the Woodman-Scheller Graduate Fellowships in Israel

the time Adolf Eichmann was tried for his crimes in Israel in 1961, many other Nazi war criminals had already been convicted in Nuremberg and elsewhere. What made the Eichmann trial unique was that instead of trying a group, Eichmann was made to account for his personal role in the deaths of millions of Jews throughout Europe. His trial brought the Holocaust to the attention of many people who had never fully understood its significance. Lipstadt sees an evolution in Holocaust denial away from the hard-core denial of David Irving and toward what she calls softcore denial. “Soft-core is more slippery. It’s ‘Why do we have to hear so much about the Holocaust?’ Soft-core denial is not denying the facts, but either inverting it so the victims become the perpetrators — ‘Why did the Germans hate the Jews? Because they Jews were rich and conniving,’— as if to say they deserved it. It’s justifying it. Soft-core denial is also making a false comparison, and that dilutes what the Holocaust was. It’s a much more slippery kind of manifestation, but it’s very much there,” she told JTA. Lipdstadt is also concerned about the role of the Internet in fostering soft-core denial. “What the Internet has done is put a lot of unfiltered information out there, and by so doing it makes it harder for people to differentiate what is legitimate information and what is not; what is fact and what is fiction. The Internet is a wonderful thing — it allows us to spread information in a way we never did before. But it puts out a lot of lies and it’s easy access for people,” Lipstadt said. Lipstadt’s work to put Holocaust denial on trial recently scored a major coup. This fall, production began on a major Hollywood movie dramatizing the trial. The film stars two-time Oscar winner Hillary Swank as Lipstadt and Tom Wilkinson as David Irving. "It's been in the works for a while, but I never quite imagined it would come to be,” Lipstadt said. “I’m delighted it’s coming to fruition.”