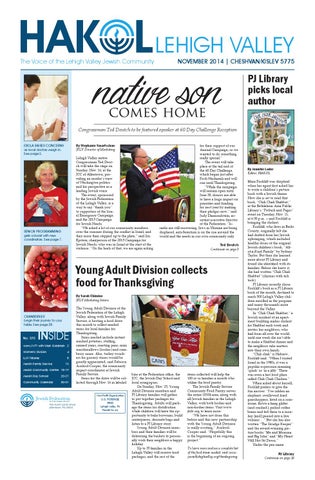 Lehigh Valley native Congressman Ted Deutch will take the stage on Sunday, Nov. 16, at the JCC of Allentown, providing an insider’s view of Washington politics and his perspective as a leading Jewish voice. The event, sponsored by the Jewish Federation of the Lehigh Valley, is a way to say “thank you” to supporters of the Israel Emergency Campaign and the 2015 Campaign for Jewish Needs. “We asked a lot of our community members over the summer during the conflict in Israel, and they more than stepped up to the plate,” said Iris Epstein, chairperson of the 2015 Campaign for Jewish Needs, who was in Israel at the start of the violence. “On the heels of that, we are again asking

SENIOR PROGRAMMING gets a boost with new coordinators. See page 7.

for their support of our Annual Campaign, so we wanted to do something really special.” The event will take place at the tail end of the 60 Day Challenge, which began just after Rosh Hashanah and will run until Thanksgiving. “While the campaign will remain open until June 30, donors are able to have a huge impact on priorities and funding for next year by making their pledges now,” said Judy Diamondstein, assistant executive director of the Federation. “Israelis are still recovering, Jews in Ukraine are being displaced, anti-Semitism is on the rise around the world and the needs in our own community only

CRANBERRIES begin their journey to your table. See page 28.

The Young Adult Division of the Jewish Federation of the Lehigh Valley, along with Jewish Family Service, is hosting a food drive this month to collect needed items for local families for Thanksgiving. Items needed include instant mashed potatoes, stuffing, canned yams, roasting pans, mini marshmallows (kosher) and cranberry sauce. Also, turkey vouchers for grocery stores would be greatly appreciated, said Rebecca Axelrod-Cooper, the community impact coordinator at Jewish Family Service. Items for the drive will be collected through Nov. 16 in labeled

bins at the Federation office, the JCC, the Jewish Day School and local synagogues. On Sunday, Nov. 23, Young Adult Division members and PJ Library families will gather to put together packages for Thanksgiving. Adults will package the items for distribution while children will have the opportunity to bake brownies, build centerpieces, decorate bags and listen to a PJ Library story. Young Adult Division members and their families will be delivering the baskets to personally wish their neighbors a happy holiday. Up to 35 families in the Lehigh Valley will receive food packages, and the rest of the

items collected will help the 100 or so families a month who utilize the food pantry. The Jewish Family Service Community Food Pantry serves the entire 18104 area, along with all Jewish families in the Lehigh Valley, with both kosher and non-kosher items. Visit www. jfslv.org to learn more. “We have not done this before and this new partnership with the Young Adult Division is really exciting,” AxelrodCooper said. “Hopefully this is the beginning of an ongoing project.” To learn more and see a complete list of the food items needed, visit www. jewishlehighvalley.org/thanksgiving.

By Jennifer Lader Editor, HAKOL Mara Rockliff was skeptical when her agent first asked her to write a children’s picture book with a Jewish theme. Now she is set to read that book, “Chik Chak Shabbat,” at the Bethlehem Area Public Library’s “Potluck and Pages” event on Tuesday, Nov. 11, at 6:30 p.m. -- and Rockliff is bringing the cholent. Rockliff, who lives in Berks County, originally felt she had drifted from her Jewish upbringing, which included healthy doses of the original Jewish children’s book, “Allof-a-Kind Family” by Sydney Taylor. But then she learned more about PJ Library and found she identified with its families. Before she knew it, she had written “Chik Chak Shabbat” (rhymes with tick tock). PJ Library recently chose Rockliff’s book as a PJ Library book of the month, destined to reach 300 Lehigh Valley children enrolled in the program and many thousands more beyond the Valley. In “Chik Chak Shabbat,” a Jewish resident of an apartment building makes cholent for Shabbat each week and invites her neighbors, who hail from all over the world, until one week she isn’t able to make a Shabbat dinner and the neighbors take matters into their own hands. “Chik chak” is Hebrew, Rockliff said. “When I visited Israel in the 1980s, it was a popular expression meaning ‘quick’ or ‘in a jiffy.’ There was even a fast food place called Chik Chak Chicken.” When asked about herself, Rockliff prefers to give the fun answer: “I’ve ridden an elephant, swallowed fried grasshoppers, lived on a commune, flown a hang glider (and crashed), picked coffee beans and fed them to a monkey [and] peered into a live volcano …” But she has also written “The Grudge Keeper” and the award-winning picture books “Me and Momma and Big John” and “My Heart Will Not Sit Down.” Under the pen name

The Jewish newspaper of Allentown, Bethlehem and Easton, Pennsylvania

The Jewish newspaper of Allentown, Bethlehem and Easton, Pennsylvania