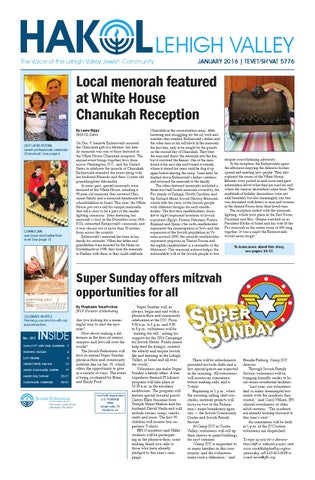 CHANUCAN was back and better than ever! See page 10.

On Dec. 9, Jeanette Eichenwald received the Chanukah gift of a lifetime: her family menorah was one of three featured at the White House Chanukah reception. The annual event brings together Jews from across Washington, D.C., and the United States to celebrate the miracle of Chanukah. Eichenwald attended the event along with her husband Eduardo and their 11-year old granddaughter Alexandra. In years past, special menorahs were featured at the White House, inluding a 90-year old menorah that survived Hurricane Sandy and a menorah handmade by schoolchildren in Israel. This year, the White House put out a call for unique menorahs that tell a story to be a part of the candle lighting ceremony. After featuring her menorah’s story in the December issue, HAKOL submitted Eichenwald’s menorah, and it was chosen out of more than 50 entries from across the country. Eichenwald’s menorah has been in her family for centuries. When her father and grandfather were arrested by the Nazis on Kristallnacht in 1938, they took the menorah to Dachau with them so they could celebrate

Chanukah in the concentration camp. After bartering and smuggling for the oil, wick and matches they needed, Eichenwald’s father and the other men in his cell block lit the menorah the first day, only to be caught by the guards on the second day of Chanukah. They beat the men and threw the menorah into the fire, but it survived the flames. One of the men found it the next day and buried it outside, where it stayed for years until he dug it up again before leaving the camp. Years later, he tracked down Eichenwald’s father’s address and returned the menorah to the family. The other featured menorahs included a three-foot-tall Israeli menorah owned by the Fox family of Raleigh, North Carolina, and the Richard Meier Jewish History Menorah, which tells the story of the Jewish people with different designs for each candleholder. The first five candleholders (from left to right) represent locations of Jewish expulsion (Egypt, Roman Palestine, France, England and Spain,) the sixth candleholder represents the emancipation of Jews and the expansion of the Jewish population in Vienna around 1890, the seventh candleholder represents pogroms in Tzarist Russia and the eighth candleholder is a reminder of the Holocaust. This menorah acknowledges the indomitable will of the Jewish people to live

despite overwhelming adversity. At the reception, the Eichenwalds spent the afternoon enjoying the delicious kosher spread and meeting new people. They also explored the rooms of the White House. Marines were posted in each room and gave information about what they are used for and where the various decorations came from. The multitude of holiday decorations were not only beautiful, but also meaningful; one tree was decorated with letters to men and women in the Armed Forces from their loved ones. The reception ended with the menorah lighting, which took place in the East Room. President and Mrs. Obama watched on as President Rivlin of Israel and his wife lit the Fox menorah as the entire room of 600 sang together. It was a night the Eichenwalds would never forget.

Super Sunday offers mitzvah opportunities for all By Stephanie Smartschan JFLV Director of Marketing CELEBRATE IN STYLE Planning your simcha with our special section.

Are you looking for a meaningful way to start the new year? How about making a difference in the lives of seniors, campers and Jews all over the world? The Jewish Federation will host its annual Super Sunday phone-a-thon and community mitzvah day on Jan. 31, which offers the opportunity to give in a variety of ways. The event is being co-chaired by Brian and Emily Ford.

Super Sunday will, as always, begin and end with a phone-a-thon and community celebration at the JCC. From 9:30 a.m. to 1 p.m. and 5:30 to 8 p.m., volunteers will be “making the call,” asking for support for the 2016 Campaign for Jewish Needs. Funds raised help feed the hungry, comfort the elderly and inspire Jewish life and learning in the Lehigh Valley, in Israel and all over the world. Volunteers can make Super Sunday a family affair. A free superhero-themed PJ Library program will take place at 10:30 a.m. in the auxiliary auditorium. The program will feature special musical guests Cantor Ellen Sussman from Temple Shirat Shalom and her husband David Vaida and will include stories, songs, snacks, crafts and more. The first 50 children will receive free superhero T-shirts. BBYO members and Hillel students will be participating in the phone-a-thon, some making thank you calls to those who have already pledged to this year’s campaign.

There will be refreshments provided for both shifts and a few special guests are expected in the morning. All volunteers will receive an orientation before making calls, and a T-shirt. Beginning at 1 p.m., when the morning calling shift concludes, mitzvah projects will focus on two of the Federation’s major beneficiary agencies — the Jewish Community Center and Jewish Family Service. At Camp JCC in Center Valley, volunteers will roll up their sleeves to paint buildings for next summer. “Camp JCC is important to so many families in this community, and the volunteers make such a difference,” said

Brenda Finberg, Camp JCC director. Through Jewish Family Service, volunteers will be bringing friendly smiles to local senior residential facilities. “Last year, our volunteers had so many meaningful moments with the residents they visited,” said Carol Wilson, JFS clinical coordinator of older adult services. “The residents are already looking forward to this year’s visit.” An orientation will be held at 1 p.m. at the JCC before volunteers are dispatched. To sign up now for a phone-athon shift or mitzvah project, visit www.jewishlehighvalley.org/supersunday, call 610-821-5500 or e-mail aaron@jflv.org. 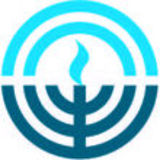