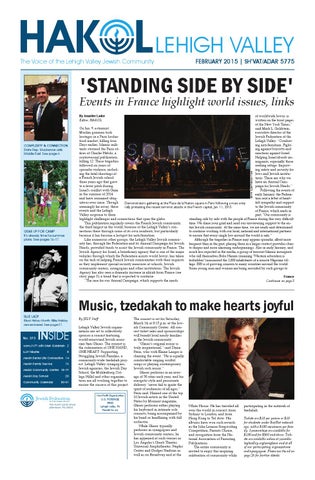 'STANDING SIDE BY SIDE' Events in France highlight world issues, links

of worldwide Jewry, is written on the front pages of the New York Times,” On Jan. 9, extremist said Mark L. Goldstein, Muslim gunmen took executive director of the hostages in a Paris kosher Jewish Federation of the food market, killing four. Lehigh Valley. “CombatDays earlier, Islamic miliing anti-Semitism. Fighttants stormed the Paris ofing against boycotts and fices of Charlie Hebdo, a sanctions against Israel. controversial publication, Helping Israel absorb imkilling 12. These tragedies migrants, especially those followed on years of seeking refuge. Improvsporadic violence, including safety and security for ing the fatal shootings at Jews and Jewish institua French Jewish school tions. These are why we three years ago that grew have an Annual Camto a fever pitch during paign for Jewish Needs.” Israel's conflict with Gaza Following the events of in the summer of 2014 early January, the Federaand have remained ubiqtion sent a letter of heartuitous ever since. Though felt sympathy and support Demonstrators gathering at the Place de la Nation square in Paris following a mass unity seemingly far away, these to the Jewish community rally protesting the recent terrorist attacks in the French capital, Jan. 11, 2015. events and the Lehigh of France, which reads in Valley response to them part, "Our community is highlight challenges and connections that span the globe. standing side by side with the people of France during this very difficult This publication regularly covers the French Jewish community, time. We share your grief and send our unwavering support to the enthe third largest in the world, because of the Lehigh Valley's contire Jewish community. At the same time, we are ready and determined nections there through some of its own residents, but particularly to continue working with our local, national and international partners because it has become a hotspot for anti-Semitism. to ensure that every single Jew around the world is safe." Like numerous other groups, the Lehigh Valley Jewish commuAlthough the tragedies in France may appear sporadic, albeit more nity has, through the Federation and its Annual Campaign for Jewish frequent than in the past, placing them in a larger context provides clues Needs, provided funds to assist the Jewish community in France. The to deeper and more alarming underpinnings. Also in early January, and Jewish Agency for Israel, a beneficiary agency that is one of the major much less reported in the media, a group of terrorist Islamic insurgents vehicles through which the Federation assists world Jewry, has taken who call themselves Boko Haram (meaning "Western education is on the task of helping French Jewish communities with their requests forbidden") massacred the 2,000 inhabitants of a remote Nigerian vilas they implement special security measures at schools, Jewish lage. ISIS is of growing concern to many countries around the world. community centers, synagogues and other institutions. The Jewish Some young men and women are being recruited by such groups to Agency has also seen a dramatic increase in aliyah from France (see story page 3), a trend that is expected to continue. France “The case for our Annual Campaign, which supports the needs Continues on page 5 By Jennifer Lader Editor, HAKOL

By JFLV Staff Lehigh Valley Jewish organizations are set to collectively sponsor a concert featuring world-renowned Jewish musician Sam Glaser. The concert is the culmination of ONE HAND, ONE HEART: Supporting Struggling Jewish Families, a community-wide tzedakah project. Lehigh Valley synagogues, Jewish agencies, the Jewish Day School, the Muhlenberg College Hillel and other organizations are all working together to ensure the success of this project. Non-Profit Organization

The concert is set for Saturday, March 14, at 8:15 p.m. at the Jewish Community Center. All concert ticket sales and sponsorships will benefit local needy families in the Jewish community. “Glaser's original music is truly inspirational,” said Diane Stein, who with Elaine Langer is chairing the event. “He is equally comfortable singing soulful songs or playing contemporary Jewish rock music.” Glaser performs in an average of 50 cities each year, and his energetic style and passionate delivery “never fail to ignite the spirit of audiences of all ages,” Stein said. Named one of the top 10 Jewish artists in the United States by Moment magazine, Glaser performs either playing his keyboard in intimate solo concerts, being accompanied by his band or headlining with full orchestra. While Glaser typically performs in synagogues and Jewish community centers, he has appeared at such venues as Los Angeles's Greek Theater, Universal Amphitheater, Staples Center and Dodger Stadium as well as on Broadway and at the

White House. He has traveled all over the world in concert, from Sydney to London, and from Hong Kong to Tel Aviv. His albums have won such awards as the John Lennon Songwriting Competition, Parents Choice, and recognition from the National Association of Parenting Publications. The entire community is invited to enjoy this inspiring celebration of community while

participating in the mitzvah of tzedakah. Tickets are $18 per person or $10 for students under Bar/Bat mitzvah age, with a $100 maximum per family. Sponsorships are available for $180 and for $360 and above. Tickets are available online at jewishlehighvalley.org/samglaser and at all of our participating organizations and synagogues. Please see the ad on page 26 for further details.

The Jewish newspaper of the Lehigh Valley in Eastern Pennsylvania

The Jewish newspaper of the Lehigh Valley in Eastern Pennsylvania