Jewish Voice and Opinion May 2011 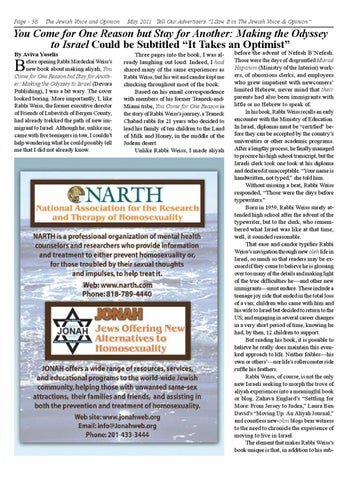 The Jewish Voice and Opinion

May 2011 Tell Our Advertisers “I Saw It in The Jewish Voice &amp; Opinion”

Three pages into the book, I was already laughing out loud. Indeed, I had shared many of the same experiences as Rabbi Weiss, but his wit and candor kept me chucking throughout most of the book. Based on his email correspondence with members of his former Teaneck-andMiami tribe, You Come for One Reason is the story of Rabbi Weiss’s journey, a Teaneck Chabad rabbi for 21 years who decided to lead his family of ten children to the Land of Milk and Honey, in the middle of the Judean desert. Unlike Rabbi Weiss, I made aliyah

before the advent of Nefesh B’Nefesh. Those were the days of disgruntled Misrad Hapanim (Ministry of the Interior) workers, of obnoxious clerks, and employees who grew impatient with newcomers’ limited Hebrew, never mind that their parents had also been immigrants with little or no Hebrew to speak of. In his book, Rabbi Weiss recalls an early encounter with the Ministry of Education. In Israel, diplomas must be “certified” before they can be accepted by the country’s universities or other academic programs. After a lengthy process, he finally managed to procure his high school transcript, but the Israeli clerk took one look at his diploma and declared it unacceptable. “Your name is handwritten, not typed,” she told him. Without missing a beat, Rabbi Weiss responded, “Those were the days before typewriters.” Born in 1959, Rabbi Weiss surely attended high school after the advent of the typewriter, but to the clerk, who remembered what Israel was like at that time, well, it sounded reasonable. That ease and candor typifies Rabbi Weiss’s navigation through new oleh life in Israel, so much so that readers may be excused if they come to believe he is glossing over too many of the details and making light of the true difficulties he—and other new immigrants—must endure. These include a teenage joy ride that ended in the total loss of a van; children who came with him and his wife to Israel but decided to return to the US; and engaging in several career changes in a very short period of time, knowing he had, by then, 12 children to support. But reading his book, it is possible to believe he really does maintain this evenkeel approach to life. Neither foibles—his own or others’—nor life’s rollercoaster ride ruffle his feathers. Rabbi Weiss, of course, is not the only new Israeli seeking to morph the trove of aliyah experiences into a meaningful book or blog. Zahava Englard’s “Settling for More: From Jersey to Judea,” Laura Ben David’s “Moving Up: An Aliyah Journal,” and countless new-olim blogs bear witness to the need to chronicle the experience of moving to live in Israel. The element that makes Rabbi Weiss’s book unique is that, in addition to his sub-

Jewish Voice and Opinion May 2011

The Jewish Voice and Opinion speaks out forcefully and unashamedly for the unique concerns of what we have termed “classical Judaism.” As a politically conservative Jewish publication, we take as our mission to present news and feature articles not generally available elsewhere in the Jewish or secular. media. This issue covers the unity between Fatah and Hamas, Alan Dershowitz on Israel, the AIFL, new yeshivas in New Jersey, the Arab spring,