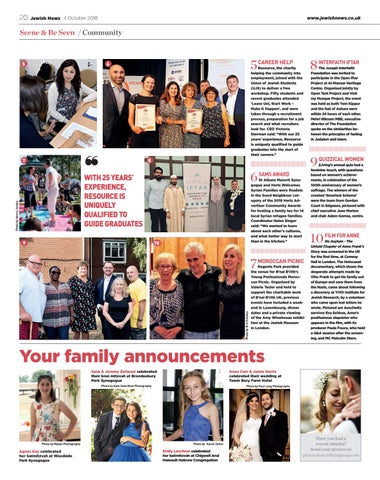 Resource, the charity helping the community into employment, joined with the Union of Jewish Students (UJS) to deliver a free workshop. Fifty students and recent graduates attended ‘Leave Uni, Start Work – Make It Happen’, and were taken through a recruitment process, preparation for a job search and what recruiters look for. CEO Victoria Sterman said: “With our 25 years’ experience, Resource is uniquely qualified to guide graduates into the start of their careers.”

WITH 25 YEARS’ EXPERIENCE, RESOURCE IS UNIQUELY QUALIFIED TO GUIDE GRADUATES 9

St Albans Masorti Synagogue and Herts Welcomes Syrian Families were finalists in the Good Neighbour category of the 2018 Herts Advertiser Community Awards for hosting a family tea for 14 local Syrian refugee families. Coordinator Helen Singer said: “We wanted to learn about each other’s cultures, and what better way to start than in the kitchen.”

Regents Park provided the venue for B’nai B’rith’s Young Professionals Moroccan Picnic. Organised by Valerie Tesler and held to support the charitable work of B’nai B’rith UK, previous events have included a weekend in Luxembourg, dinner dates and a private viewing of the Amy Winehouse exhibition at the Jewish Museum in London.

The Joseph Interfaith Foundation was invited to participate in the Open Iftar Project at Al-Manaar Heritage Centre. Organised jointly by Open Tent Project and Visit my Mosque Project, the event was held as both Yom Kippur and the fast of Ashura were within 24 hours of each other. Mehri Niknam MBE, executive director of The Foundation spoke on the similarities between the principles of fasting in Judaism and Islam.

jLiving’s annual quiz had a feminine touch, with questions based on women’s achievements, in celebration of the 100th anniversary of women’s suffrage. The winners of the coveted ‘Smartest Scheme’ were the team from Gordon Court in Edgware, pictured with chief executive June Morton and chair Adam Gamsu, centre.

No Asylum - The Untold Chapter of Anne Frank’s Story was screened in the UK for the first time, at Conway Hall in London. The Holocaust documentary, which shows the desperate attempts made by Otto Frank to get his family out of Europe and save them from the Nazis, came about following a discovery at YIVO Institute for Jewish Research, by a volunteer who came upon lost letters he wrote. Pictured are Auschwitz survivor Eva Schloss, Anne’s posthumous stepsister who appears in the film, with its producer Paula Fouce, who held a Q&amp;A session after the screening, and MC Malcolm Stern.

Have you had a recent simcha? Send your picture to picturedesk@thejngroup.com