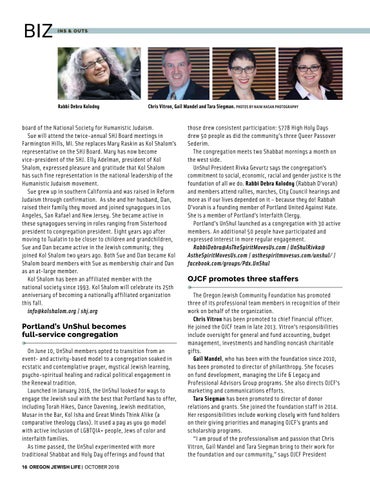 board of the National Society for Humanistic Judaism. Sue will attend the twice-annual SHJ Board meetings in Farmington Hills, MI. She replaces Mary Raskin as Kol Shalom’s representative on the SHJ Board. Mary has now become vice-president of the SHJ. Elly Adelman, president of Kol Shalom, expressed pleasure and gratitude that Kol Shalom has such fine representation in the national leadership of the Humanistic Judaism movement. Sue grew up in southern California and was raised in Reform Judaism through confirmation. As she and her husband, Dan, raised their family they moved and joined synagogues in Los Angeles, San Rafael and New Jersey. She became active in these synagogues serving in roles ranging from Sisterhood president to congregation president. Eight years ago after moving to Tualatin to be closer to children and grandchildren, Sue and Dan became active in the Jewish community; they joined Kol Shalom two years ago. Both Sue and Dan became Kol Shalom board members with Sue as membership chair and Dan as an at-large member. Kol Shalom has been an affiliated member with the national society since 1993. Kol Shalom will celebrate its 25th anniversary of becoming a nationally affiliated organization this fall. info@kolshalom.org | shj.org

Portland’s UnShul becomes full-service congregation On June 10, UnShul members opted to transition from an event- and activity-based model to a congregation soaked in ecstatic and contemplative prayer, mystical Jewish learning, psycho-spiritual healing and radical political engagement in the Renewal tradition. Launched in January 2016, the UnShul looked for ways to engage the Jewish soul with the best that Portland has to offer, including Torah Hikes, Dance Davening, Jewish meditation, Musar in the Bar, Kol Isha and Great Minds Think Alike (a comparative theology class). It used a pay as you go model with active inclusion of LGBTQIA+ people, Jews of color and interfaith families. As time passed, the UnShul experimented with more traditional Shabbat and Holy Day offerings and found that 16 OREGON JEWISH LIFE | OCTOBER 2018

those drew consistent participation: 5778 High Holy Days drew 50 people as did the community’s three Queer Passover Sederim. The congregation meets two Shabbat mornings a month on the west side. UnShul President Rivka Gevurtz says the congregation’s commitment to social, economic, racial and gender justice is the foundation of all we do. Rabbi Debra Kolodny (Rabbah D’vorah) and members attend rallies, marches, City Council hearings and more as if our lives depended on it – because they do! Rabbah D’vorah is a founding member of Portland United Against Hate. She is a member of Portland’s Interfaith Clergy. Portland’s UnShul launched as a congregation with 30 active members. An additional 50 people have participated and expressed interest in more regular engagement. RabbiDebra@AsTheSpiritMovesUs.com | UnShulRivka@ AstheSpiritMovesUs.com | asthespiritmovesus.com/unshul/ | facebook.com/groups/Pdx.UnShul

OJCF promotes three staffers The Oregon Jewish Community Foundation has promoted three of its professional team members in recognition of their work on behalf of the organization. Chris Vitron has been promoted to chief financial officer. He joined the OJCF team in late 2013. Vitron’s responsibilities include oversight for general and fund accounting, budget management, investments and handling noncash charitable gifts. Gail Mandel, who has been with the foundation since 2010, has been promoted to director of philanthropy. She focuses on fund development, managing the Life & Legacy and Professional Advisors Group programs. She also directs OJCF’s marketing and communications efforts. Tara Siegman has been promoted to director of donor relations and grants. She joined the foundation staff in 2014. Her responsibilities include working closely with fund holders on their giving priorities and managing OJCF’s grants and scholarship programs.   “I am proud of the professionalism and passion that Chris Vitron, Gail Mandel and Tara Siegman bring to their work for the foundation and our community,” says OJCF President