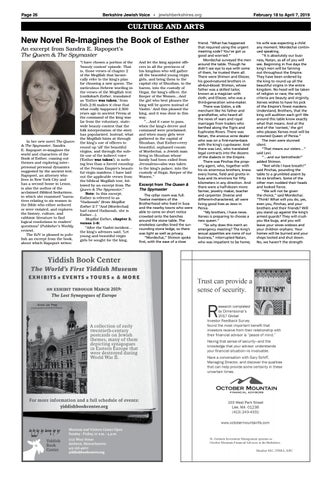 New Novel Re-Imagines the Book of Esther An excerpt from Sandra E. Rapoport’s The Queen &amp; The Spymaster

In her new novel The Queen &amp; The Spymaster, Sandra E. Rapoport re-imagines the world and characters of the Book of Esther, coaxing out themes and exploring interpersonal personal dynamics suggested by the ancient text. Rapoport, an attorney who lives in New York City and has a second home in Lenox, is also the author of the acclaimed Biblical Seductions, in which she examined “narratives relating to six women in the Bible who either seduced or were violated, and explores the history, culture, and rabbinic literature to find logical resolutions to readers’ questions” (Publisher’s Weekly review). The BJV is pleased to publish an excerpt from the book, about which Rapoport writes:

“I have chosen a portion of the ‘beauty contest’ episode. That is, those verses of chapter 2 of the Megillah that laconically refer to the king’s plan for choosing a new queen. The meticulous Hebrew wording in the verses of the Megillah text (vatilakach Esther, translated as ‘Esther was taken,’ from Esth.2:8) makes it clear that what really happened 2,500 years ago in ancient Persia at the command of the king was far from the voluntary, statewide beauty contest that the folk interpretation of the story has popularized. Instead, what the Megillah hints at through the king’s use of officers to round up ‘all’ the beautiful virgins, and through the subtle use of the indirect voice (‘Esther was taken’), is nothing less than a forced roundup of the Persian Empire’s beautiful virgin maidens. I have laid out the applicable verses from the biblical Megillah text, followed by an excerpt from The Queen &amp; The Spymaster.” Note: In this excerpt, Esther is referred to as “Hadassah” (from Megillat Esther 2:7 “And [Mordechai] had raised Hadassah, she is Esther…). Megillat Esther, chapter 2, verses 1-8: “After the Vashti incident… the king’s advisors said, ‘Let young and beautiful virgin girls be sought for the king.

And let the king appoint officers in all the provinces of his kingdom who will gather all the beautiful young virgin girls, and bring them to the capital city of Shushan, to the harem, into the custody of Hegai, the king’s officer, the Keeper of the Women…And the girl who best pleases the king will be queen instead of Vashti.’ And this pleased the king, and it was done in this way. “…And it came to pass, when the king’s decree and command were proclaimed, and when many girls were gathered in the capital of Shushan, that Esther—very beautiful, orphaned cousin of Mordechai, a Jewish man living in Shushan whose family had been exiled from Jerusalem—also was taken to the king’s palace, into the custody of Hegai, Keeper of the Women.”

Excerpt from The Queen &amp; The Spymaster The cellar room was full. Twelve members of the Brotherhood who lived in Susa and the nearby towns who were able to come on short notice crowded onto the benches around the stone table. The smokeless candles lined the surrounding stone ledge, so there was light as well as privacy. “Mordechai,” Shimon spoke first, with the ease of a close

friend. “What has happened that required using the urgent meeting code? You’ve got us good and worried.” Mordechai surveyed the men around the table. Though he didn’t see eye to eye with some of them, he trusted them all. There were Shimon and Eliezer, his good-natured brothers in all-but-blood: Shimon, whose father was a skilled tailor, known as a magician with cloth; and Eliezer, who was a third-generation wine-maker. There was Gidon, a silk merchant like his father and grandfather, who heard all the news of wars and royal marriages from traders who berthed along the Tigris and Euphrates Rivers. There was Natan, the anxious wine dealer who was on a first-name-basis with the king’s cup-bearer. And there was Levi, who translated legal contracts into the dozens of the dialects in the Empire. There was Pinchas the property agent, who, together with his six enormous brothers, knew every home, field and grotto in Susa and its environs for fifty kilometers in any direction. And there were a half-dozen more: farmer, jewelry maker, teacher and carpenter. Diverse and different-charactered, all were living good lives as Jews in Persia. “My brothers, I have news. Xerxes is preparing to choose a new queen.” “So why does this merit an emergency meeting? The king’s sexual appetites are none of our business,” interrupted Natan, who was impatient to be home;

his wife was expecting a child any moment. Mordechai continued speaking. “It is absolutely our business, Natan, as all of you will see. Beginning in five days the king’s men will be fanning out throughout the Empire. They have been ordered by the king to round up all the beautiful virgins in the entire kingdom. No heed will be taken of religion or race; the only criteria are beauty and virginity. Xerxes wishes to have his pick of the Empire’s finest maidens. Understand, Brothers, that the king will audition each girl! We around this table know exactly what that means. And at the end of the ‘contest,’ the girl who pleases Xerxes most will be crowned Queen of Persia.” The men were stunned silent. “That means our sisters…” said Levi. “…and our betrotheds!” added Shimon. “Not while I have breath!” said Pinchas, pounding the table to a grumbled assent by his six brothers. Some of the other men nodded their heads and looked fierce. “We will not be given the choice,” said Mordechai. “Think! What will you do, yes, even you, Pinchas, and your brothers and their friends? Will you stand up against the king’s armed guards? They will crush you like bugs, and you will leave your wives widows and your children orphans. Your homes will be burned and your shops looted and shut down. No, we haven’t the strength 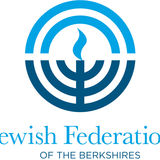 Jewish Federation of the Berkshires