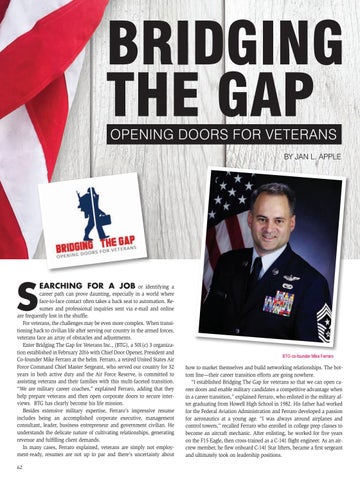 or identifying a career path can prove daunting, especially in a world where face-to-face contact often takes a back seat to automation. Resumes and professional inquiries sent via e-mail and online are frequently lost in the shuffle. For veterans, the challenges may be even more complex. When transitioning back to civilian life after serving our country in the armed forces, veterans face an array of obstacles and adjustments. Enter Bridging The Gap for Veterans Inc., (BTG), a 501(c) 3 organization established in February 2016 with Chief Door Opener, President and Co-founder Mike Ferraro at the helm. Ferraro, a retired United States Air Force Command Chief Master Sergeant, who served our country for 32 years in both active duty and the Air Force Reserve, is committed to assisting veterans and their families with this multi-faceted transition. “We are military career coaches,” explained Ferraro, adding that they help prepare veterans and then open corporate doors to secure interviews. BTG has clearly become his life mission. Besides extensive military expertise, Ferraro’s impressive resume includes being an accomplished corporate executive, management consultant, leader, business entrepreneur and government civilian. He understands the delicate nature of cultivating relationships, generating revenue and fulfilling client demands. In many cases, Ferraro explained, veterans are simply not employment-ready, resumes are not up to par and there’s uncertainty about 62

how to market themselves and build networking relationships. The bottom line—their career transition efforts are going nowhere. “I established Bridging The Gap for veterans so that we can open career doors and enable military candidates a competitive advantage when in a career transition,” explained Ferraro, who enlisted in the military after graduating from Howell High School in 1982. His father had worked for the Federal Aviation Administration and Ferraro developed a passion for aeronautics at a young age. “I was always around airplanes and control towers,” recalled Ferraro who enrolled in college prep classes to become an aircraft mechanic. After enlisting, he worked for five years on the F15 Eagle, then cross-trained as a C-141 flight engineer. As an aircrew member, he flew onboard C-141 Star lifters, became a first sergeant and ultimately took on leadership positions. 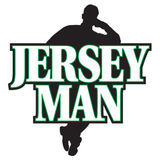