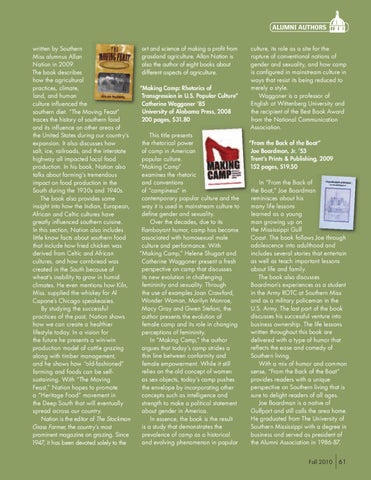 ALUMNI AUTHORS written by Southern Miss alumnus Allan Nation in 2009. The book describes how the agricultural practices, climate, land, and human culture influenced the southern diet. “The Moving Feast” traces the history of southern food and its influence on other areas of the United States during our country’s expansion. It also discusses how salt, ice, railroads, and the interstate highway all impacted local food production. In his book, Nation also talks about farming’s tremendous impact on food production in the South during the 1930s and 1940s. The book also provides some insight into how the Indian, European, African and Celtic cultures have greatly influenced southern cuisine. In this section, Nation also includes little know facts about southern food that include how fried chicken was derived from Celtic and African cultures, and how cornbread was created in the South because of wheat’s inability to grow in humid climates. He even mentions how Kiln, Miss. supplied the whiskey for Al Capone’s Chicago speakeasies. By studying the successful practices of the past, Nation shows how we can create a healthier lifestyle today. In a vision for the future he presents a win-win production model of cattle grazing along with timber management, and he shows how “old-fashioned” farming and foods can be selfsustaining. With “The Moving Feast,” Nation hopes to promote a “Heritage Food” movement in the Deep South that will eventually spread across our country. Nation is the editor of The Stockman Grass Farmer, the country’s most prominent magazine on grazing. Since 1947, it has been devoted solely to the

art and science of making a profit from grassland agriculture. Allan Nation is also the author of eight books about different aspects of agriculture. “Making Camp: Rhetorics of Transgression in U.S. Popular Culture” Catherine Waggoner ’85 University of Alabama Press, 2008 200 pages, $31.80 This title presents the rhetorical power of camp in American popular culture. “Making Camp” examines the rhetoric and conventions of “campiness” in contemporary popular culture and the way it is used in mainstream culture to define gender and sexuality. Over the decades, due to its flamboyant humor, camp has become associated with homosexual male culture and performance. With “Making Camp,” Helene Shugart and Catherine Waggoner present a fresh perspective on camp that discusses its new evolution in challenging femininity and sexuality. Through the use of examples Joan Crawford, Wonder Woman, Marilyn Monroe, Macy Gray and Gwen Stefani, the author presents the evolution of female camp and its role in changing perceptions of femininity. In “Making Camp,” the author argues that today’s camp strides a thin line between conformity and female empowerment. While it still relies on the old concept of women as sex objects, today’s camp pushes the envelope by incorporating other concepts such as intelligence and strength to make a political statement about gender in America. In essence, the book is the result is a study that demonstrates the prevalence of camp as a historical and evolving phenomenon in popular

culture, its role as a site for the rupture of conventional notions of gender and sexuality, and how camp is configured in mainstream culture in ways that resist its being reduced to merely a style. Waggoner is a professor of English at Wittenberg University and the recipient of the Best Book Award from the National Communication Association. “From the Back of the Boat” Joe Boardman, Jr. ’53 Trent’s Prints &amp; Publishing, 2009 152 pages, $19.50 In “From the Back of the Boat,” Joe Boardman reminisces about his many life lessons learned as a young man growing up on the Mississippi Gulf Coast. The book follows Joe through adolescence into adulthood and includes several stories that entertain as well as teach important lessons about life and family. The book also discusses Boardman’s experiences as a student in the Army ROTC at Southern Miss and as a military policeman in the U.S. Army. The last part of the book discusses his successful venture into business ownership. The life lessons written throughout this book are delivered with a type of humor that reflects the ease and comedy of Southern living. With a mix of humor and common sense, “From the Back of the Boat” provides readers with a unique perspective on Southern living that is sure to delight readers of all ages. Joe Boardman is a native of Gulfport and still calls the area home. He graduated from The University of Southern Mississippi with a degree in business and served as president of the Alumni Association in 1986-87. Fall 2010

The quarterly magazine of the Southern Miss Alumni Association 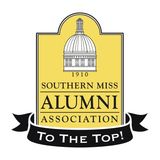