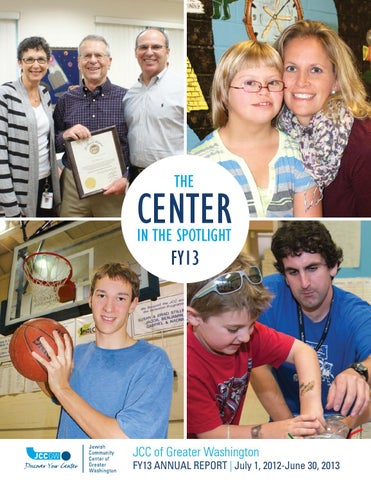 CENTER IN THE SPOTLIGHT FY13

The year 2013 was especially meaningful for the Jewish Community Center of Greater Washington (JCCGW), as it marked the 100th anniversary of the Centerâ&amp;#x20AC;&amp;#x2122;s founding.

In 1913, a few young men came together in a shared vision. The result was a Jewish Community Center established to help Jewish immigrants find their place in American society by providing educational, cultural and social programs and services not otherwise available to them. While the Center has evolved over the years, the essence of the JCCGW as a center for Jewish life has remained constant. We welcome everyone, regardless of age, background, ability, lifestyle, religion or economic status. This report reflects the Centerâ&amp;#x20AC;&amp;#x2122;s achievements for fiscal year 2013 (July 1, 2012-June 30, 2013), measured not only in statistics, but in the positive impact our programs and services have had on the lives of those we serve.

We create a welcoming and inclusive environment, connecting the people of our Jewish community with each other, Israel and the broader community. We inspire individuals of all ages and backgrounds to enhance their social, physical, intellectual and spiritual well-being through programs of excellence rooted in Jewish values.

We will be the heart of our Jewish community, playing a central role in reaching out to build a welcoming, diverse and thriving community that enriches Jewish life for each generation.

• Kavod Ha-briot (Respect for one another) We respect the dignity of every person. • Klal Yisrael (One people) We welcome all Jewish traditions and backgrounds. • Kehilla (Community) We connect individuals to the community and communities to each other. • Eretz Y’israel (Israel) We connect our community to the people, history, culture and land of Israel. • B’yachad (Working together) We partner with Jewish and secular organizations to build a stronger community.

• Hachnassat Orchim (Welcoming guests) We open our doors to everyone. • Gemilut Chasadim (Acts of loving kindness) We help those in need through acts of loving kindness. • Tikkun Olam (Repairing the world) We make the world a better and more just place. • Shmirat Ha-teva (Preserving nature) We respect our environment. • Torah (Jewish Learning) We promote Jewish learning and intellectual enrichment. • Shmirat HaNefesh v’HaGuf (Preserving our selves) We promote the well-being and fitness of every person. • Ruach (Spirit) We infuse spirit and fun into our activities and programs.

Joanna Levine (left), shown with her husband Adam and daughters Nina and Sophie, says that joining the JCCGW opened up a whole new world for their family.

I found the community feel I was looking for through the JCCGW. We are very happy here. 4

When Joanna and Adam Levine were searching for a preschool for their daughter Sophie, the JCCGW was the first stop on their search. After touring the school and learning about all that the Center has to offer, it was also the last stop.

Along with the school’s nurturing and welcoming environment, Joanna has found that the fitness facility, the pools and the myriad of activities that the Center offers are added bonuses of which the Levine family takes full advantage. Adam was a Camp JCC counselor as a teen, and he has also played in the Center’s softball league. A Florida native, Joanna had never belonged to a Jewish Community Center. She says that joining the JCCGW opened up a whole new world for her family. Many of the parents of the children in Sophie’s class have become very close, creating a supportive bond between families. Joanna sums up her JCCGW experience by saying, “I found the community feel I was looking for through the JCCGW. We are very happy here.”

IMPACT Preschool Instilled the foundation for students who have gone through our preschool program to be enthusiastic learners and successful both in academic pursuits and as productive members of society.

Teen volunteers instruct senior adults on use of the computer, Internet and mobile technology in a relaxed setting.

Facilitated the efforts of newcomers from the Former Soviet Union and elsewhere to learn English and prepare for the US citizenship exam by offering ESOL (English for Speakers of Other Languages) and citizenship classes.

While friendships are a common theme at summer camp, relationships formed through the Camp JCC Inclusion Program can be profoundly meaningful. Camper Anderson Jones, who has Down syndrome, and his Camp JCC inclusion counselor, Sam Hofman, have a very special relationship. Anderson’s mother Kirsten says that with Sam’s help, Anderson is able to participate in all camp activities with his peers. “As a parent, it’s reassuring to know that Anderson is in a place that’s welcoming, with his own inclusion counselor who is tuned in to his needs, and staff who work to make the camp experience so special,” Kirsten relates. “Although he’s only 7 years old, Anderson is my best friend,” says Sam. “Anderson is constantly pushing me to think creatively. His growth has been astounding, and he shows no signs of slowing. I think we both benefit so much from our relationship.”

Nurtured friendships through shared experiences at Camp JCC, a program that builds strong Jewish identities and creates memories that last a lifetime.

Toby has created a wonderful outlet for the members of the group, many of whom are retired or widowed and adapting to a new stage of life. 8

“It’s all about connecting,” states volunteer Toby Gottesman about the JCCGW in general and the men’s discussion group in particular. While working out at the JCCGW, Toby noticed that a lot of men come to the Health &amp; Fitness Center not just to exercise, but also to socialize, discuss personal issues and talk about politics and current events. That observation was an impetus for the formation of the discussion group. “For many men, the workplace can provide a source of structure and social relationships,” Toby explains. “After retirement, developing and maintaining relationships may become difficult and can lead to isolation.” JCCGW Senior Adult Services Director Debbie Sokobin says the positive effects of the group are abundantly clear: “Men have told me how much the group means to them, and that they now plan their schedule around these meetings. Toby has created a wonderful outlet for the members of the group, many of whom are retired or widowed and adapting to a new stage of life.” “It’s just like the TV show Cheers, where everybody knows your name and you feel comfortable,” Toby suggests. “The men’s group is about feeling connected, and that’s what the JCCGW is about.”

Enhanced the lives of adults by offering the opportunity to participate in discussion groups to exchange ideas, share thoughts and gain knowledge.

Drew the community together by offering art exhibitions, book and film festivals, dance performances and concerts through the Gildenhorn/Speisman Center for the Arts.

Offered the opportunity for children, parents and grandparents in our community to celebrate Jewish holidays together.

“When I got my start as a little kid playing basketball at the JCCGW, I had no idea that someday I would get the chance to play basketball in other countries around the world,” states JCCGW member Josh Fried.

It seems as if Josh has grown up in the JCCGW gymnasium. His parents, Stephanie and Kenny Fried, joined the JCCGW in 1996 and began taking then 1-year-old Josh to Family Gym on Sundays. Josh estimates that he’s spent hundreds of hours shooting baskets in the JCCGW gym. He played in the Center’s youth basketball league; participated in the Mid-Atlantic Jr. Maccabi Games, a one-day athletic event for Jewish athletes age 10-12; and progressed to the JCC Maccabi Games, a week-long Olympic-style sporting competition held each summer in North America for Jewish athletes age 13-16. Playing at the Maccabiah Games in Israel had been Josh’s goal for a long time. “I played and prepared for the Maccabiah Games for what seems like forever,” he asserts. After the US team beat the Israeli team in the championship game, Josh says that going up to center court to receive a gold medal was one of the best moments of his life. “I felt proud to be a Jew and proud to be an American. I had accomplished what I set out to do: discover Israel, reconnect with my identity and win a gold medal.”

Encouraged members to achieve their fitness goals by offering the newest trends in group fitness— such as Les Mills BodyPump, Zumba® and Spinning®—led by certified instructors and designed to boost endurance, strength and motivation.

Fostered the health and wellness of individuals with special needs living in group homes by offering reduced-rate memberships to our fitness center.

Josh Fried has played on the basketball teams representing the United States at the Maccabiah in Israel and the European Maccabi Games in Austria.

I felt proud to be a Jew and proud to be an American. I had accomplished what I set out to do: discover Israel, reconnect with my identity and win a gold medal. JCCGW FY13 ANNUAL REPORT | July 1, 2012-June 30, 2013

services for individuals with special needs.

program scholarships for those in need.

Other Revenue including Investment gains (losses)

Includes non-cash expenses such as depreciation of $572,000

This list reflects gifts of $500+ received during FY13 (July 1, 2012 through June 20, 2013). Every effort has been made to accurately list each donor. We apologize for any omissions or errors. Please note that this list does not reflect gifts toward the Centennial Campaign, which will be included in future publications. If you have any questions or corrections, please contact Development Director Tasha Museles at 301.348.3815 or tmuseles@jccgw.org.

Create a Jewish Legacy Jewish tradition teaches that it is our responsibility to make the world a better place for our children. By leaving a legacy gift to the JCCGW, you will ensure that the traditions and values that mean so much to you will live on for future generations. The JCCGW’s Flora M. Stetson Legacy Society recognizes and honors those who, in their estate plans, have created “We are creating a legacy at the JCCGW because there a legacy for the Center through a bequest or other planned is no greater community organization in providing human gift. For information about setting up a planned gift for the kindness and caring for our community.” JCCGW, please contact Tasha Museles at 301.348.3815 or —Sheila and Sy Herman tmuseles@jccgw.org.

Endowments Endowments support the Center today and help strengthen our community into the future. Many donors establish endowment funds to honor the memory of a loved one; others choose to establish an endowment during their lifetime so they can see the results of their generosity. The JCCGW currently has more than 200 named endowment funds. Income generated by these funds helps underwrite the costs associated with a wide range of programs, including

classes, lectures and workshops, cultural arts events, scholarships for camp and preschool and a kosher meal program for senior adults. For a list of JCCGW endowments, please visit jccgw.org/endowments. For information about establishing an endowment fund, please contact Samantha Frankel at 301.348.3861 or sfrankel@jccgw.org.

JCCGW Membership JCCGW membership is open to all. The Center is committed to creating a welcoming and inclusive environment that allows members and other participants the opportunity to enhance their social, physical, intellectual and spiritual well-being. JCCGW members enjoy the following benefits: • Access to the Weinberg Health &amp; Fitness Center, complete with indoor and outdoor swimming pools, full basketball court, more than 65 group exercise classes and more • Family Gym on Sunday mornings • Fun in Recreation Station • Kass Judaic Library, full of Jewish must-reads • Babysitting onsite while you work out or attend a JCCGW program • Corporate partner benefits • Use of other JCC facilities throughout the U.S. and Canada • Refer a friend and receive $50 in Center Cash when they join as fitness members