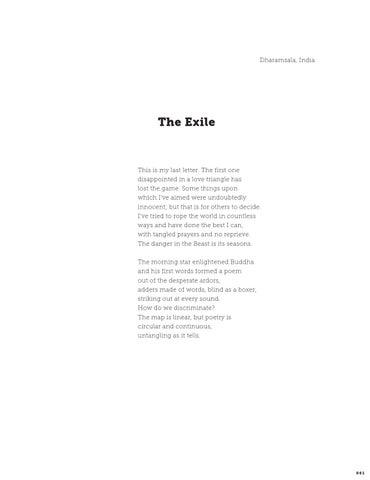 This is my last letter. The first one disappointed in a love triangle has lost the game. Some things upon which Iâ&amp;#x20AC;&amp;#x2122;ve aimed were undoubtedly innocent; but that is for others to decide. Iâ&amp;#x20AC;&amp;#x2122;ve tried to rope the world in countless ways and have done the best I can, with tangled prayers and no reprieve. The danger in the Beast is its seasons. The morning star enlightened Buddha and his first words formed a poem out of the desperate ardors, adders made of words, blind as a boxer, striking out at every sound. How do we discriminate? The map is linear, but poetry is circular and continuous, untangling as it tells.