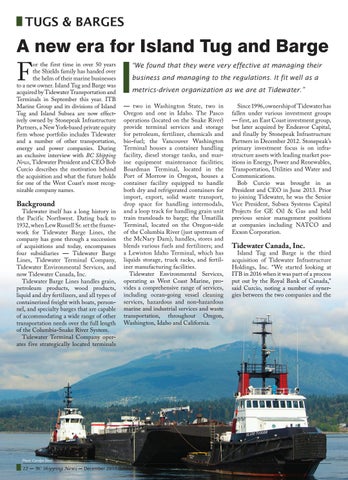 A new era for Island Tug and Barge

or the first time in over 50 years the Shields family has handed over the helm of their marine businesses to a new owner. Island Tug and Barge was acquired by Tidewater Transportation and Terminals in September this year. ITB Marine Group and its divisions of Island Tug and Island Subsea are now effectively owned by Stonepeak Infrastructure Partners, a New York-based private equity firm whose portfolio includes Tidewater and a number of other transportation, energy and power companies. During an exclusive interview with BC Shipping News, Tidewater President and CEO Bob Curcio describes the motivation behind the acquisition and what the future holds for one of the West Coast’s most recognizable company names.

Tidewater itself has a long history in the Pacific Northwest. Dating back to 1932, when Lew Russell Sr. set the framework for Tidewater Barge Lines, the company has gone through a succession of acquisitions and today, encompasses four subsidiaries — Tidewater Barge Lines, Tidewater Terminal Company, Tidewater Environmental Services, and now Tidewater Canada, Inc. Tidewater Barge Lines handles grain, petroleum products, wood products, liquid and dry fertilizers, and all types of containerized freight with boats, personnel, and specialty barges that are capable of accommodating a wide range of other transportation needs over the full length of the Columbia-Snake River System. Tidewater Terminal Company operates five strategically located terminals

“We found that they were very effective at managing their business and managing to the regulations. It fit well as a metrics-driven organization as we are at Tidewater.” — two in Washington State, two in Oregon and one in Idaho. The Pasco operations (located on the Snake River) provide terminal services and storage for petroleum, fertilizer, chemicals and bio-fuel; the Vancouver Washington Terminal houses a container handling facility, diesel storage tanks, and marine equipment maintenance facilities; Boardman Terminal, located in the Port of Morrow in Oregon, houses a container facility equipped to handle both dry and refrigerated containers for import, export, solid waste transport, drop space for handling intermodals, and a loop track for handling grain unit train transloads to barge; the Umatilla Terminal, located on the Oregon-side of the Columbia River (just upstream of the McNary Dam), handles, stores and blends various fuels and fertilizers; and a Lewiston Idaho Terminal, which has liquids storage, truck racks, and fertilizer manufacturing facilities. Tidewater Environmental Services, operating as West Coast Marine, provides a comprehensive range of services, including ocean-going vessel cleaning services, hazardous and non-hazardous marine and industrial services and waste transportation, throughout Oregon, Washington, Idaho and California.

Since 1996, ownership of Tidewater has fallen under various investment groups — first, an East Coast investment group, but later acquired by Endeavor Capital, and finally by Stonepeak Infrastructure Partners in December 2012. Stonepeak’s primary investment focus is on infrastructure assets with leading market positions in Energy, Power and Renewables, Transportation, Utilities and Water and Communications. Bob Curcio was brought in as President and CEO in June 2013. Prior to joining Tidewater, he was the Senior Vice President, Subsea Systems Capital Projects for GE Oil &amp; Gas and held previous senior management positions at companies including NATCO and Exxon Corporation.

Island Tug and Barge is the third acquisition of Tidewater Infrastructure Holdings, Inc. “We started looking at ITB in 2016 when it was part of a process put out by the Royal Bank of Canada,” said Curcio, noting a number of synergies between the two companies and the 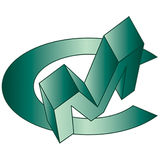