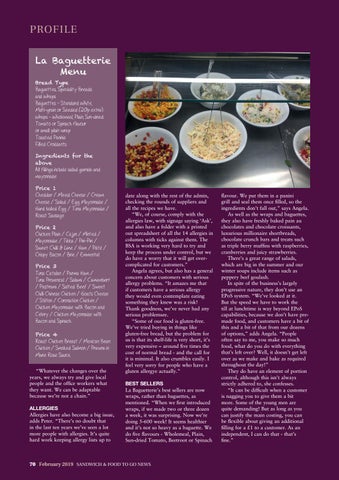 date along with the rest of the admin, checking the rounds of suppliers and all the recipes we have. “We, of course, comply with the allergies law, with signage saying ‘Ask’, and also have a folder with a printed out spreadsheet of all the 14 allergies in columns with ticks against them. The BSA is working very hard to try and keep the process under control, but we do have a worry that it will get overcomplicated for customers.” Angela agrees, but also has a general concern about customers with serious allergy problems. “It amazes me that if customers have a serious allergy they would even contemplate eating something they knew was a risk! Thank goodness, we’ve never had any serious problemsee. “Some of our food is gluten-free. We’ve tried buying in things like gluten-free bread, but the problem for us is that its shelf-life is very short, it’s very expensive – around five times the cost of normal bread - and the call for it is minimal. It also crumbles easily. I feel very sorry for people who have a gluten allergye actually.” BEST SELLERS La Baguetterie’s best sellers are now wraps, rather than baguettes, as mentioned. “When we first introduced wraps, if we made two or three dozen a week, it was surprising. Now we’re doing 5-600 week! It seems healthier and it’s not so heavy as a baguette. We do five flavours - Wholemeal, Plain, Sun-dried Tomato, Beetroot or Spinach

flavour. We put them in a panini grill and seal them once filled, so the ingredients don’t fall out,” says Angela. As well as the wraps and baguettes, they also have freshly baked pain au chocolates and chocolate croissants, luxurious millionaire shortbreads, chocolate crunch bars and treats such as triple berry muffins with raspberries, cranberries and juicy strawberries. There’s a great range of salads, which are big in the summer and our winter soups include items such as peppery beef goulash.  In spite of the business’s largely progressive nature, they don’t use an EPoS system. “We’ve looked at it. But the speed we have to work the till at lunchtime is way beyond EPoS capabilities, because we don’t have premade food, and customers have a bit of this and a bit of that from our dozens of options,” adds Angela. “People often say to me, you make so much food, what do you do with everything that’s left over? Well, it doesn’t get left over as we make and bake as required throughout the day!” They do have an element of portion control, although this isn’t always strictly adhered to, she confesses. “It can be difficult when a customer is nagging you to give them a bit more. Some of the young men are quite demanding! But as long as you can justify the main costing, you can be flexible about giving an additional filling for a £1 to a customer. As an independent, I can do that - that’s fine.” The latest industry news, profiles of inspiring businesses and the Sammies Awards 2019 get underway.

The latest industry news, profiles of inspiring businesses and the Sammies Awards 2019 get underway.