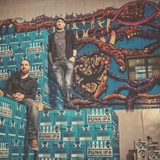 At the age of 24, James embarked on a new journey. Inspired by the bold and experimental beers being brewed by a new generation of brewers on the West Coast of the United States, James teamed up with friend Martin Dickie and began brewing their own beers in Martin's mother's garage. In a world dominated by cask bitters and mass-produced lagers, their penchant for heavily hopped and relentlessly bitter beers distinguished them as a unique pairing, particularly in the town of Fraserburgh. Unafraid of public opinion, they pursued their passion through painstaking research, experimentation, and boundary-pushing ideas, hellbent on demonstrating that beer can be more than fizzy yellow liquid produced by global brewing giants. 2007 proved to be a watershed year for James. BrewDog opened its doors in a derelict industrial estate in Fraserburgh, sandwiched between a needle exchange and 'The Godfather of Carpets.' While Martin oversaw brewing and production, James focused on business development, account management, and spearheading the brand's new breed of irreverent marketing that garnered headlines for years. Not only did the pair create some of the most innovative beers the UK has ever seen, but James also spearheaded Equity for Punks, a ground-breaking new crowdfunding initiative that would be replicated by other brands around the world for years to come.