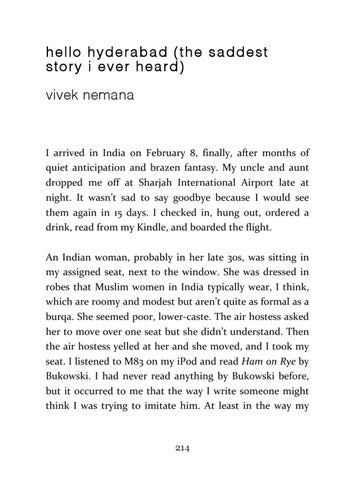 hello hyderabad (the saddest story i ever heard) vivek nemana

I arrived in India on February 8, finally, after months of quiet anticipation and brazen fantasy. My uncle and aunt dropped me off at Sharjah International Airport late at night. It wasn’t sad to say goodbye because I would see them again in 15 days. I checked in, hung out, ordered a drink, read from my Kindle, and boarded the flight. An Indian woman, probably in her late 30s, was sitting in my assigned seat, next to the window. She was dressed in robes that Muslim women in India typically wear, I think, which are roomy and modest but aren’t quite as formal as a burqa. She seemed poor, lower-­‐caste. The air hostess asked her to move over one seat but she didn’t understand. Then the air hostess yelled at her and she moved, and I took my seat. I listened to M83 on my iPod and read Ham on Rye by Bukowski. I had never read anything by Bukowski before, but it occurred to me that the way I write someone might think I was trying to imitate him. At least in the way my

It is well known that people ascribe different cities with their own identities; our urban landscapes most certainly have their own unique way in which they are represented in culture, film, and writing. But what interested me for this project was how those identities are so often transplanted onto their inhabitants. And while dispute continues over terminology to define contemporary literature, there is an undeniable shared quality in how we write, publish, and take in literature in the internet era. The “cityscapes” in this project are reflections on the urban environments that we all know and how the current generation of writers relates to them. 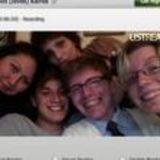