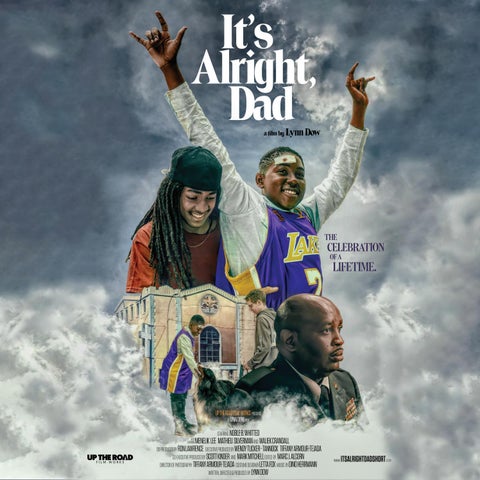 The Celebration OF A LIFETIME

Log line: When a young boy befriends a teen skateboarder and coaxes him into a nearby church to meet his father, the teen realizes his new found friend has a tragic story.

Synopsis: Young Tarik loves basketball, but only second to spending time with his father who is often away on deployment with the US Army. We find Tarik outside of New Mt. Zion Baptist Church with his father’s small notebook in hand, wearing his father’s Kobe Bryant official jersey over his dress shirt. There is a bandage on his forehead where he was grazed by a bullet. He asks passersby if they want to meet his father. After several tries, Caleb, a kind teen on a skateboard approaches Tarik, admiring his Kobe Bryant jersey. They strike up a conversation, and Caleb shows Tarik how to skateboard. Afterwards, he agrees to meet Tarik’s father. While going to retrieve his skateboard before entering the church Caleb finds that Tarik has already gone in. When Caleb enters the church he realizes it’s not the father Tarik wants him to meet, but the real Tarik, who has his own tragic secret.

The COVID-19 pandemic changed the course of the world and sadly, an increase in gun violence has followed in its wake. I wanted to tell this story to bring light to the other pandemic running rampant in the United States, senseless violence that is taking the lives of our youth. As citizens, we need to stand up and make our voices heard. It takes a village; we all play a part in helping to raise and encourage our youth. Police brutality, mass shootings in our schools and churches, random gang initiations and street killings is rampant and impacting innocent bystanders – children, teens and young adults, trying to enjoy their daily lives. We are losing young people, young minds of all races (white, black, yellow, and brown). I wanted to do my part to show the pain that the violence brings to our community. To encourage each of us to stand up and do what we can to help stop the violence. If we don’t act now America will lose that which is most precious, our children.

“…I wanted to tell this story to bring light to the other pandemic running rampant...!”

Crew Lynn Dow (writer, director, producer) was born and raised in New York City, NY. She became interested in filmmaking at an early age and is a graduate of Columbia University in New York City. After graduating, she worked on Wall Street before leaving to pursue her true passion, filmmaking. She has produced a feature documentary, nine short films and written and directed six of them. Her awards include a Best Screenplay and Audience award in the Chelsea Film Festival, Short Script in the StoryMode International Script Awards, sixth place in the American Gem Literary Festival, a screenplay winner in the Colorado International Film Festival and numerous official selections around the country. She is set to direct her first feature film, which she also wrote. Wendy Tucker-Tannock (executive producer, producer) produced her first short film, Still Harlem, in 2018. She followed with short films, It’s Alright, Dad and Compassionate Release which have garnered numerous awards and film festival selections. Tucker-Tannock produced her first feature documentaary, Neutralize, in 2021 and also working on a narrative feature film, in South Carolina. She was born in the island of Bermuda. TuckerTannock is a graduate of Spelman College in Atlanta, Georgia. She gained an early interest in writing and photography from her father - first black cameraman in Bermuda - which led to her success in filmmaking.

Tiffany Armour-Tejada (director of photography) is a cinematographer. She was the first minority woman to join local 600 as a Digital Imaging Technician on the east coast and has over forty credits to date. She began her career working on short films and will mark her debut as the cinematographer on a feature film set in South Carolina.

Cast Noble B. Whitted (Tarik ) at four (4) years old didn’t have a home with a television in it, the substitute was access to his mom’s a laptop and DVDs, his favorite ones were Marvel. He would watch the movie once then was enamored by the behind the scenes videos that document how it was made and chose to watch that over and over and over again. At six (6) years old Noble landed a role on his first audition and would make his acting debut in a Disney Junior Black History Month commercial alongside some prestigious young actors. Since 2016 Noble has polished his acting skills in The Blue Rock School and observing the process while working on various projects as a background actor. He worked on hit shows such as: “New Amsterdam”, “Madame Secretary,” “Orange is the New Black”, “The Affair”, &amp; “The Last OG”. Menelik Lee (Caleb ) is a 17 year old actor/ filmmaker/model that has worked on variety of projects such as background for Law and Order, Power, the Upside, Nickelodeon Kids choice awards, B.E.T awards and modeled for companies such as Nike, Old Navy, DKNY, Stuido 189, Park Deli.

Mathieu Jacob Silverman (Adam) was born in February 2006 in New York City to Jenifer, a Plastic Surgery Physician Assistant and Michael, a neuroscientist. He is the youngest of two children. His love of acting began at age ten after reluctantly auditioning for the school play and winning the lead comedic role. Then, catching the bug, he began taking acting lessons at The Barrow Acting School in Times Square and auditioning for more professional opportunities. He received the Young Entertainer Award for Best Actor in a Short Film. Waliek Crandall ( Mr. Williams) is a Brooklyn born actor from the New York City area. As a child, he always dreamed of becoming one of the greatest actors of his time. Waliek’s parents could not afford the expensive acting classes so he learned from watching television. He would watch the facial expressions and reactions of the actors and then re- enact the scenes. Waliek would also repeat the lines over but would use different emotions by adding his own unique style. He would really study the movement and body language of some of his favorite black actors and actresses he could relate to and who were on tv at the time. Some of Waliek’s inspirations and acting role models were Sherman Hemsley (The Jeffersons), Robert Guillaume (Benson), Phillip Micheal Thomas (Miami Vice), John Amos (Good Times) and his #1 favorite all time actor, Danny Glover. Some of Waliek’s performance credits include roles in television such as, “Manifest” (NBC) “The Other Two” (HBO Max), “Stealing Chanel” (LIfeTime) and films, “See You Yesterday” produced by Spike Lee (Netflix), “Hungry”, “It’s Alright, Dad” directed by Lynn Dow and currently making festival rounds.

FAQs WHAT INSPIRED YOU TO WRITE IT’S ALRIGHT, DAD? Our children are being killed and wounded. What the covid pandemic has left behind is not only unemployment, but an increase in gun violence and gun crime especially in our black and brown communities. Back-to-back pandemics is what a majority of our major cities are facing. We must find a way to save our children. The increase in gun violence across America, in the major cities, Chicago, Atlanta, D.C. Philadelphia, Houston, and especially where I live in New York City. We are watching young, innocent children being gunned down steps away from playgrounds, from schools and from the homes. We are all responsible to be change agents.

IS IT TRUE THAT THIS WAS A 1-DAY FILM SHOOT? Yes. Incredibly. We were scheduled for a one day 12-hour film shoot and came in at 11.5 hours. The cast and crew had an amazing professional bond. Mutual respect. One goal. One mission. The important thing was that everyone believed in the script.

WAS IT DIFFICULT WORKING WITH THE DOG AND THE CHILDREN? It is said that it is very difficult to work with children and dogs. Hard to get their attention. The young boys on set where very professional and dedicated. They soaked in everything. It was unbelievable and beautiful to watch. They are truly our future. Each of the boys are bright and very talented. The first time I saw Noble, the lead actor’s photo…I knew he was the one. Menelik, I met because his young twin sisters were in my short film, “Compassionate Release.” And Mathieu was in my short film, “Still Harlem.”

The two boys in the park, one is my cousin and the other from my church. However, it was Bailey the Bernese Mountain dog who stole the show. Very cooperative. Never barked. Just lovable. Give Bailey a treat and you will get his attention. I became a dog lover on the set.

DID YOU REALLY USE YOUR CHILDHOOD CHURCH AND CAST YOUR PASTOR? Yes. I was baptized and still attend, my Grand momma’s church, as I like to call it. They are so proud and supportive. They’ve seen me work hard and encouraged me to stay with it. And yes, I casted one of the elderly members and another as an extra and of course, my Pastor. And it’s funny because my very first short film, Above the Sun, I casted my Pastor in the role of the Preacher. He kept rewriting the dialogue, so I fired him. With this short film, “It’s Alright, Dad,” I also needed a Pastor and I cast him again, but this time I gave him no lines so, it worked out perfectly. He deserves an Oscar.

YOUR PREVIOUS FILMS WERE DEDICATED TO A FAMILY MEMBER...WILL THAT BE THE SAME WITH IT’S ALRIGHT. DAD? Indeed. This one is dedicated to the men in my family who have served this country in the US Army while trying to maintain a strong presence with their families back home. To raise a young black boy to manhood while serving I feel is a very powerful thing.

A celebration of a lifetime, short film 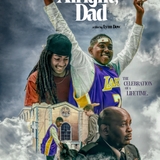