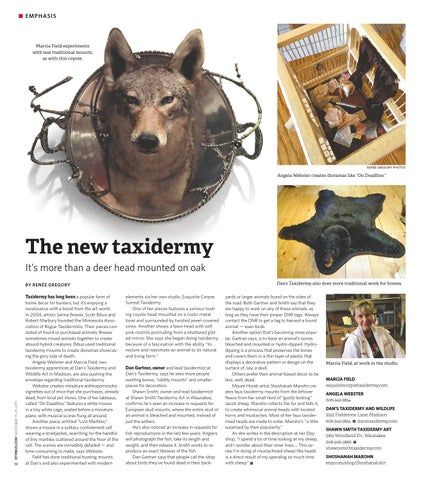 Marcia Field experiments with less traditional mounts, as with this coyote.

Taxidermy has long been a popular form of home decor for hunters, but it’s enjoying a renaissance with a boost from the art world. In 2004, artists Sarina Brewer, Scott Bibus and Robert Marbury founded the Minnesota Association of Rogue Taxidermists. Their pieces consisted of found or purchased animals; Brewer sometimes mixed animals together to create absurd hybrid creatures. Bibus used traditional taxidermy mounts to create dioramas showcasing the gory side of death. Angela Webster and Marcia Field, two taxidermy apprentices at Dan’s Taxidermy and Wildlife Art in Madison, are also pushing the envelope regarding traditional taxidermy. Webster creates miniature anthropomorphic vignettes out of mice that she purchases, already dead, from local pet stores. One of her tableaus, called “On Deadline,” features a white mouse in a tiny white cage, seated before a miniature piano, with musical scores flung all around. Another piece, entitled “Lost Marbles,” shows a mouse in a solitary confinement cell wearing a straitjacket, searching for the handful of tiny marbles scattered around the floor of the cell. The scenes are incredibly detailed — and time-consuming to make, says Webster. Field has done traditional hunting mounts at Dan’s and also experimented with modern

elements via her own studio, Exquisite Corpse Surreal Taxidermy. One of her pieces features a serious-looking coyote head mounted on a rustic metal bowl and surrounded by twisted jewel-covered vines. Another shows a fawn head with soft pink nostrils protruding from a shattered gilded mirror. She says she began doing taxidermy because of a fascination with the ability “to restore and reanimate an animal to its natural and living form.” Dan Gartner, owner and lead taxidermist at Dan’s Taxidermy, says he sees more people wanting bones, “oddity mounts” and smaller pieces for decoration. Shawn Smith, owner and lead taxidermist at Shawn Smith Taxidermy Art in Waunakee, confirms he’s seen an increase in requests for European skull mounts, where the entire skull of an animal is bleached and mounted, instead of just the antlers. He’s also noticed an increase in requests for fish reproductions in the last few years. Anglers will photograph the fish, take its length and weight, and then release it. Smith works to reproduce an exact likeness of the fish. Dan Gartner says that people call the shop about birds they’ve found dead in their back-

yards or larger animals found on the sides of the road. Both Gartner and Smith say that they are happy to work on any of these animals, as long as they have their proper DNR tags. Always contact the DNR to get a tag to harvest a found animal — even birds. Another option that’s becoming more popular, Gartner says, is to have an animal’s bones bleached and mounted or hydro-dipped. Hydrodipping is a process that preserves the bones and covers them in a thin layer of plastic that displays a decorative pattern or design on the surface of, say, a skull. Others prefer their animal-based decor to be less, well, dead. Mount Horeb artist Shoshanah Marohn creates faux taxidermy mounts from the leftover fleece from her small herd of “goofy-looking” Jacob sheep. Marohn collects the fur and felts it, to create whimsical animal heads with twisted horns and mustaches. Most of her faux taxidermied heads are made to order. Marohn’s “a little surprised by their popularity.” As she writes in the description at her Etsy shop, “I spend a lot of time looking at my sheep, and I wonder about their inner lives.... This series I’m doing of mustachioed sheep-like heads is a direct result of my spending so much time with sheep.” n 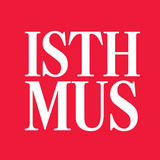