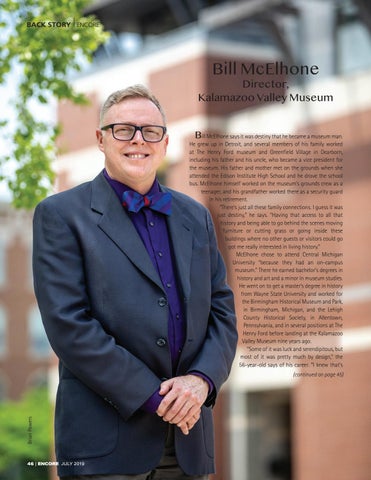 ill McElhone says it was destiny that he became a museum man. He grew up in Detroit, and several members of his family worked at The Henry Ford museum and Greenfield Village in Dearborn, including his father and his uncle, who became a vice president for the museum. His father and mother met on the grounds when she attended the Edison Institute High School and he drove the school bus. McElhone himself worked on the museum’s grounds crew as a teenager, and his grandfather worked there as a security guard in his retirement. “There’s just all these family connections. I guess it was just destiny,” he says. “Having that access to all that history and being able to go behind the scenes moving furniture or cutting grass or going inside these buildings where no other guests or visitors could go got me really interested in living history.” McElhone chose to attend Central Michigan University “because they had an on-campus museum.” There he earned bachelor’s degrees in history and art and a minor in museum studies. He went on to get a master’s degree in history from Wayne State University and worked for the Birmingham Historical Museum and Park, in Birmingham, Michigan, and the Lehigh County Historical Society, in Allentown, Pennsylvania, and in several positions at The Henry Ford before landing at the Kalamazoo Valley Museum nine years ago. “Some of it was luck and serendipitous, but most of it was pretty much by design,” the 56-year-old says of his career. “I knew that&#39;s (continued on page 45)