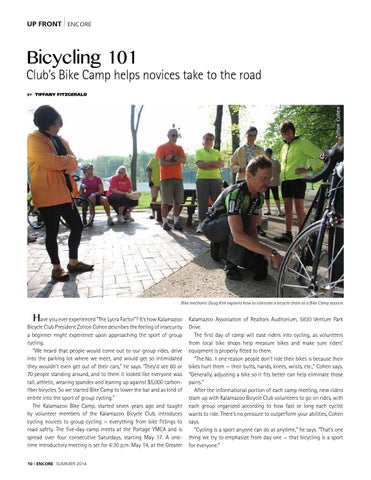 Bike mechanic Doug Kirk explains how to lubricate a bicycle chain at a Bike Camp session.

ave you ever experienced “The Lycra Factor”? It’s how Kalamazoo Bicycle Club President Zolton Cohen describes the feeling of insecurity a beginner might experience upon approaching the sport of group cycling. “We heard that people would come out to our group rides, drive into the parking lot where we meet, and would get so intimidated they wouldn’t even get out of their cars,” he says. “They’d see 60 or 70 people standing around, and to them it looked like everyone was tall, athletic, wearing spandex and leaning up against $5,000 carbonfiber bicycles. So we started Bike Camp to lower the bar and as kind of entrée into the sport of group cycling.” The Kalamazoo Bike Camp, started seven years ago and taught by volunteer members of the Kalamazoo Bicycle Club, introduces cycling novices to group cycling — everything from bike fittings to road safety. The five-day camp meets at the Portage YMCA and is spread over four consecutive Saturdays, starting May 17. A onetime introductory meeting is set for 6:30 p.m. May 14, at the Greater 10 | Encore SUMMER 2014

Kalamazoo Association of Realtors Auditorium, 5830 Venture Park Drive. The first day of camp will ease riders into cycling, as volunteers from local bike shops help measure bikes and make sure riders’ equipment is properly fitted to them. “The No. 1 one reason people don’t ride their bikes is because their bikes hurt them — their butts, hands, knees, wrists, etc.,” Cohen says. “Generally, adjusting a bike so it fits better can help eliminate those pains.” After the informational portion of each camp meeting, new riders team up with Kalamazoo Bicycle Club volunteers to go on rides, with each group organized according to how fast or long each cyclist wants to ride. There’s no pressure to outperform your abilities, Cohen says. “Cycling is a sport anyone can do at anytime,” he says. “That’s one thing we try to emphasize from day one — that bicycling is a sport for everyone.”