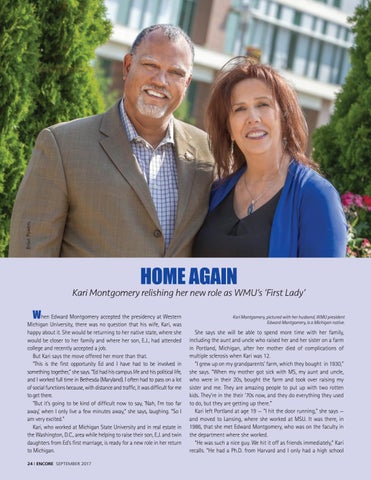 hen Edward Montgomery accepted the presidency at Western Michigan University, there was no question that his wife, Kari, was happy about it. She would be returning to her native state, where she would be closer to her family and where her son, E.J., had attended college and recently accepted a job. But Kari says the move offered her more than that. “This is the first opportunity Ed and I have had to be involved in something together,” she says. “Ed had his campus life and his political life, and I worked full time in Bethesda (Maryland). I often had to pass on a lot of social functions because, with distance and traffic, it was difficult for me to get there. “But it’s going to be kind of difficult now to say, ‘Nah, I’m too far away,’ when I only live a few minutes away,” she says, laughing. “So I am very excited.” Kari, who worked at Michigan State University and in real estate in the Washington, D.C., area while helping to raise their son, E.J. and twin daughters from Ed’s first marriage, is ready for a new role in her return to Michigan. 24 | Encore SEPTEMBER 2017

She says she will be able to spend more time with her family, including the aunt and uncle who raised her and her sister on a farm in Portland, Michigan, after her mother died of complications of multiple sclerosis when Kari was 12. “I grew up on my grandparents’ farm, which they bought in 1930,” she says. “When my mother got sick with MS, my aunt and uncle, who were in their 20s, bought the farm and took over raising my sister and me. They are amazing people to put up with two rotten kids. They’re in the their &#39;70s now, and they do everything they used to do, but they are getting up there.” Kari left Portland at age 19 — “I hit the door running,” she says — and moved to Lansing, where she worked at MSU. It was there, in 1986, that she met Edward Montgomery, who was on the faculty in the department where she worked. “He was such a nice guy. We hit it off as friends immediately,” Kari recalls. “He had a Ph.D. from Harvard and I only had a high school