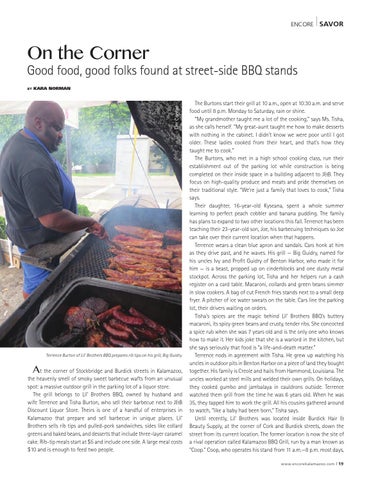 At the corner of Stockbridge and Burdick streets in Kalamazoo,

the heavenly smell of smoky sweet barbecue wafts from an unusual spot: a massive outdoor grill in the parking lot of a liquor store. The grill belongs to Lil’ Brothers BBQ, owned by husband and wife Terrence and Tisha Burton, who sell their barbecue next to J&amp;B Discount Liquor Store. Theirs is one of a handful of enterprises in Kalamazoo that prepare and sell barbecue in unique places. Lil’ Brothers sells rib tips and pulled-pork sandwiches, sides like collard greens and baked beans, and desserts that include three-layer caramel cake. Rib-tip meals start at $5 and include one side. A large meal costs $10 and is enough to feed two people.

The Burtons start their grill at 10 a.m., open at 10:30 a.m. and serve food until 8 p.m. Monday to Saturday, rain or shine. “My grandmother taught me a lot of the cooking,” says Ms. Tisha, as she calls herself. “My great-aunt taught me how to make desserts with nothing in the cabinet. I didn’t know we were poor until I got older. These ladies cooked from their heart, and that’s how they taught me to cook.” The Burtons, who met in a high school cooking class, run their establishment out of the parking lot while construction is being completed on their inside space in a building adjacent to J&amp;B. They focus on high-quality produce and meats and pride themselves on their traditional style. “We’re just a family that loves to cook,” Tisha says. Their daughter, 16-year-old Kyseana, spent a whole summer learning to perfect peach cobbler and banana pudding. The family has plans to expand to two other locations this fall. Terrence has been teaching their 23-year-old son, Joe, his barbecuing techniques so Joe can take over their current location when that happens. Terrence wears a clean blue apron and sandals. Cars honk at him as they drive past, and he waves. His grill — Big Guidry, named for his uncles Ivy and Profit Guidry of Benton Harbor, who made it for him — is a beast, propped up on cinderblocks and one dusty metal stockpot. Across the parking lot, Tisha and her helpers run a cash register on a card table. Macaroni, collards and green beans simmer in slow cookers. A bag of cut French fries stands next to a small deep fryer. A pitcher of ice water sweats on the table. Cars line the parking lot, their drivers waiting on orders. Tisha’s spices are the magic behind Lil’ Brothers BBQ’s buttery macaroni, its spicy green beans and crusty, tender ribs. She concocted a spice rub when she was 7 years old and is the only one who knows how to make it. Her kids joke that she is a warlord in the kitchen, but she says seriously that food is “a life-and-death matter.” Terrence nods in agreement with Tisha. He grew up watching his uncles in outdoor pits in Benton Harbor on a piece of land they bought together. His family is Creole and hails from Hammond, Louisiana. The uncles worked at steel mills and welded their own grills. On holidays, they cooked gumbo and jambalaya in cauldrons outside. Terrence watched them grill from the time he was 6 years old. When he was 35, they tapped him to work the grill. All his cousins gathered around to watch, “like a baby had been born,” Tisha says. Until recently, Lil’ Brothers was located inside Burdick Hair &amp; Beauty Supply, at the corner of Cork and Burdick streets, down the street from its current location. The former location is now the site of a rival operation called Kalamazoo BBQ Grill, run by a man known as “Coop.” Coop, who operates his stand from 11 a.m.—8 p.m. most days, w w w.encorekalamazoo.com | 19