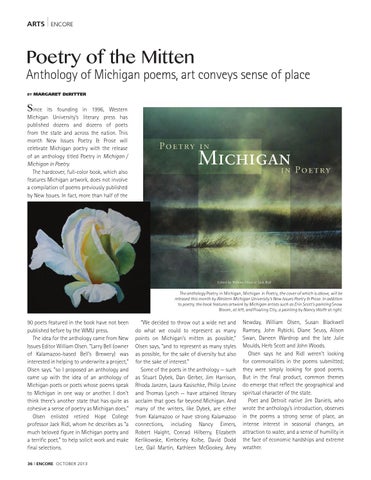 Poetry of the Mitten

Anthology of Michigan poems, art conveys sense of place by

its founding in 1996, Western Michigan University’s literary press has published dozens and dozens of poets from the state and across the nation. This month New Issues Poetry &amp; Prose will celebrate Michigan poetry with the release of an anthology titled Poetry in Michigan / Michigan in Poetry. The hardcover, full-color book, which also features Michigan artwork, does not involve a compilation of poems previously published by New Issues. In fact, more than half of the

The anthology Poetry in Michigan, Michigan in Poetry, the cover of which is above, will be released this month by Western Michigan University’s New Issues Poetry &amp; Prose. In addition to poetry, the book features artwork by Michigan artists such as Erin Scott’s painting Snow Bloom, at left, and Floating City, a painting by Nancy Wolfe at right.

90 poets featured in the book have not been published before by the WMU press. The idea for the anthology came from New Issues Editor William Olsen. “Larry Bell (owner of Kalamazoo-based Bell’s Brewery) was interested in helping to underwrite a project,” Olsen says, “so I proposed an anthology and came up with the idea of an anthology of Michigan poets or poets whose poems speak to Michigan in one way or another. I don’t think there’s another state that has quite as cohesive a sense of poetry as Michigan does.” Olsen enlisted retired Hope College professor Jack Ridl, whom he describes as “a much beloved figure in Michigan poetry and a terrific poet,” to help solicit work and make final selections. 36 | Encore OCTOBER 2013

“We decided to throw out a wide net and do what we could to represent as many points on Michigan’s mitten as possible,” Olsen says, “and to represent as many styles as possible, for the sake of diversity but also for the sake of interest.” Some of the poets in the anthology — such as Stuart Dybek, Dan Gerber, Jim Harrison, Rhoda Janzen, Laura Kasischke, Philip Levine and Thomas Lynch — have attained literary acclaim that goes far beyond Michigan. And many of the writers, like Dybek, are either from Kalamazoo or have strong Kalamazoo connections, including Nancy Eimers, Robert Haight, Conrad Hilberry, Elizabeth Kerlikowske, Kimberley Kolbe, David Dodd Lee, Gail Martin, Kathleen McGookey, Amy

Newday, William Olsen, Susan Blackwell Ramsey, John Rybicki, Diane Seuss, Alison Swan, Daneen Wardrop and the late Julie Moulds, Herb Scott and John Woods. Olsen says he and Ridl weren’t looking for commonalities in the poems submitted; they were simply looking for good poems. But in the final product, common themes do emerge that reflect the geographical and spiritual character of the state. Poet and Detroit native Jim Daniels, who wrote the anthology’s introduction, observes in the poems a strong sense of place, an intense interest in seasonal changes, an attraction to water, and a sense of humility in the face of economic hardships and extreme weather.