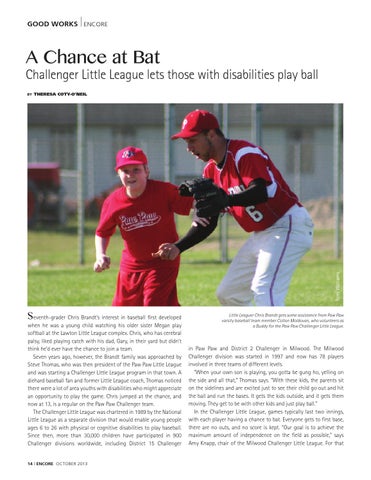 A Chance at Bat

when he was a young child watching his older sister Megan play softball at the Lawton Little League complex. Chris, who has cerebral palsy, liked playing catch with his dad, Gary, in their yard but didn’t think he’d ever have the chance to join a team. Seven years ago, however, the Brandt family was approached by Steve Thomas, who was then president of the Paw Paw Little League and was starting a Challenger Little League program in that town. A diehard baseball fan and former Little League coach, Thomas noticed there were a lot of area youths with disabilities who might appreciate an opportunity to play the game. Chris jumped at the chance, and now at 13, is a regular on the Paw Paw Challenger team. The Challenger Little League was chartered in 1989 by the National Little League as a separate division that would enable young people ages 6 to 26 with physical or cognitive disabilities to play baseball. Since then, more than 30,000 children have participated in 900 Challenger divisions worldwide, including District 15 Challenger

in Paw Paw and District 2 Challenger in Milwood. The Milwood Challenger division was started in 1997 and now has 78 players involved in three teams of different levels. “When your own son is playing, you gotta be gung ho, yelling on the side and all that,” Thomas says. “With these kids, the parents sit on the sidelines and are excited just to see their child go out and hit the ball and run the bases. It gets the kids outside, and it gets them moving. They get to be with other kids and just play ball.” In the Challenger Little League, games typically last two innings, with each player having a chance to bat. Everyone gets to first base, there are no outs, and no score is kept. “Our goal is to achieve the maximum amount of independence on the field as possible,” says Amy Knapp, chair of the Milwood Challenger Little League. For that