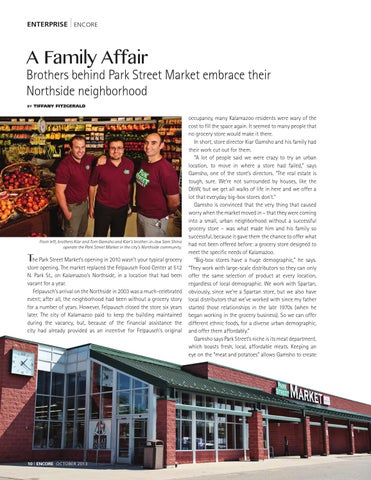 Brothers behind Park Street Market embrace their Northside neighborhood by

store opening. The market replaced the Felpausch Food Center at 512 N. Park St., on Kalamazoo’s Northside, in a location that had been vacant for a year. Felpausch’s arrival on the Northside in 2003 was a much-celebrated event; after all, the neighborhood had been without a grocery story for a number of years. However, Felpausch closed the store six years later. The city of Kalamazoo paid to keep the building maintained during the vacancy, but, because of the financial assistance the city had already provided as an incentive for Felpausch’s original

occupancy, many Kalamazoo residents were wary of the cost to fill the space again. It seemed to many people that no grocery store would make it there. In short, store director Kiar Gamsho and his family had their work cut out for them. “A lot of people said we were crazy to try an urban location, to move in where a store had failed,” says Gamsho, one of the store’s directors. “The real estate is tough, sure. We’re not surrounded by houses, like the D&amp;W, but we get all walks of life in here and we offer a lot that everyday big-box stores don’t.” Gamsho is convinced that the very thing that caused worry when the market moved in – that they were coming into a small, urban neighborhood without a successful grocery store – was what made him and his family so successful, because it gave them the chance to offer what had not been offered before: a grocery store designed to meet the specific needs of Kalamazoo. “Big-box stores have a huge demographic,” he says. “They work with large-scale distributors so they can only offer the same selection of product at every location, regardless of local demographic. We work with Spartan, obviously, since we’re a Spartan store, but we also have local distributors that we’ve worked with since my father started those relationships in the late 1970s (when he began working in the grocery business). So we can offer different ethnic foods, for a diverse urban demographic, and offer them affordably.” Gamsho says Park Street’s niche is its meat department, which boasts fresh, local, affordable meats. Keeping an eye on the “meat and potatoes” allows Gamsho to create