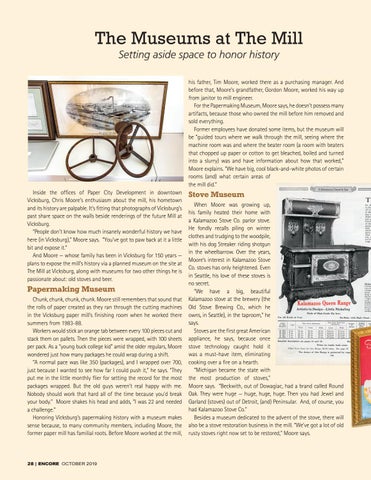 The Museums at The Mill Setting aside space to honor history

his father, Tim Moore, worked there as a purchasing manager. And before that, Moore’s grandfather, Gordon Moore, worked his way up from janitor to mill engineer. For the Papermaking Museum, Moore says, he doesn’t possess many artifacts, because those who owned the mill before him removed and sold everything. Former employees have donated some items, but the museum will be “guided tours where we walk through the mill, seeing where the machine room was and where the beater room (a room with beaters that chopped up paper or cotton to get bleached, boiled and turned into a slurry) was and have information about how that worked,” Moore explains. “We have big, cool black-and-white photos of certain rooms (and) what certain areas of the mill did.” Inside the offices of Paper City Development in downtown Vicksburg, Chris Moore’s enthusiasm about the mill, his hometown and its history are palpable. It’s fitting that photographs of Vicksburg’s past share space on the walls beside renderings of the future Mill at Vicksburg. “People don’t know how much insanely wonderful history we have here (in Vicksburg),” Moore says. “You’ve got to paw back at it a little bit and expose it.” And Moore — whose family has been in Vicksburg for 150 years — plans to expose the mill’s history via a planned museum on the site at The Mill at Vicksburg, along with museums for two other things he is passionate about: old stoves and beer.

Papermaking Museum Chunk, chunk, chunk, chunk. Moore still remembers that sound that the rolls of paper created as they ran through the cutting machines in the Vicksburg paper mill’s finishing room when he worked there summers from 1983-88. Workers would stick an orange tab between every 100 pieces cut and stack them on pallets. Then the pieces were wrapped, with 100 sheets per pack. As a “young buck college kid” amid the older regulars, Moore wondered just how many packages he could wrap during a shift. “A normal pace was like 350 (packages), and I wrapped over 700, just because I wanted to see how far I could push it,” he says. “They put me in the little monthly flier for setting the record for the most packages wrapped. But the old guys weren’t real happy with me. Nobody should work that hard all of the time because you’d break your body.” Moore shakes his head and adds, “I was 22 and needed a challenge.” Honoring Vicksburg’s papermaking history with a museum makes sense because, to many community members, including Moore, the former paper mill has familial roots. Before Moore worked at the mill,

Stove Museum When Moore was growing up, his family heated their home with a Kalamazoo Stove Co. parlor stove. He fondly recalls piling on winter clothes and trudging to the woodpile, with his dog Streaker riding shotgun in the wheelbarrow. Over the years, Moore’s interest in Kalamazoo Stove Co. stoves has only heightened. Even in Seattle, his love of these stoves is no secret. “We have a big, beautiful Kalamazoo stove at the brewery (the Old Stove Brewing Co., which he owns, in Seattle), in the taproom,” he says. Stoves are the first great American appliance, he says, because once stove technology caught hold it was a must-have item, eliminating cooking over a fire on a hearth. “Michigan became the state with the most production of stoves,” Moore says. “Beckwith, out of Dowagiac, had a brand called Round Oak. They were huge — huge, huge, huge. Then you had Jewel and Garland (stoves) out of Detroit, (and) Peninsular. And, of course, you had Kalamazoo Stove Co.” Besides a museum dedicated to the advent of the stove, there will also be a stove restoration business in the mill. “We’ve got a lot of old rusty stoves right now set to be restored,” Moore says.