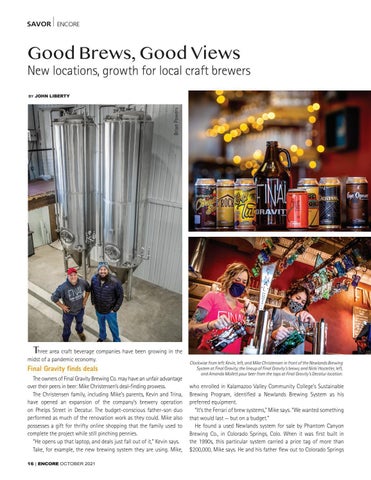 hree area craft beverage companies have been growing in the midst of a pandemic economy.

Final Gravity finds deals The owners of Final Gravity Brewing Co. may have an unfair advantage over their peers in beer: Mike Christensen’s deal-finding prowess. The Christensen family, including Mike’s parents, Kevin and Trina, have opened an expansion of the company’s brewery operation on Phelps Street in Decatur. The budget-conscious father-son duo performed as much of the renovation work as they could. Mike also possesses a gift for thrifty online shopping that the family used to complete the project while still pinching pennies. “He opens up that laptop, and deals just fall out of it,” Kevin says. Take, for example, the new brewing system they are using. Mike, 16 | ENCORE OCTOBER 2021

who enrolled in Kalamazoo Valley Community College’s Sustainable Brewing Program, identified a Newlands Brewing System as his preferred equipment. “It’s the Ferrari of brew systems,” Mike says. “We wanted something that would last — but on a budget.” He found a used Newlands system for sale by Phantom Canyon Brewing Co., in Colorado Springs, Colo. When it was first built in the 1990s, this particular system carried a price tag of more than $200,000, Mike says. He and his father flew out to Colorado Springs

Southwest Michigan's Magazine: WMed's Paula Termuhlen is the new leader who is committed to diversity and skilled at building it, Discover Kalamazoo's Newcomers Club which has connected women for 80 years, Local brewers are growing, expanding to new locations, Unearth history and mystery at local cemeteries in our Five Faves, Meet Rodger Parzyck who has been saving and salvaging old architectural materials for three decades and much more. Check out our new Arts section spotlighting greater Kalamazoo's arts community.