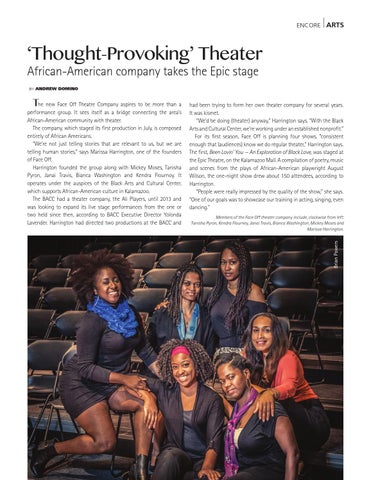 performance group. It sees itself as a bridge connecting the area’s African-American community with theater. The company, which staged its first production in July, is composed entirely of African Americans. “We’re not just telling stories that are relevant to us, but we are telling human stories,” says Marissa Harrington, one of the founders of Face Off. Harrington founded the group along with Mickey Moses, Tanisha Pyron, Janai Travis, Bianca Washington and Kendra Flournoy. It operates under the auspices of the Black Arts and Cultural Center, which supports African-American culture in Kalamazoo. The BACC had a theater company, the Ali Players, until 2013 and was looking to expand its live stage performances from the one or two held since then, according to BACC Executive Director Yolonda Lavender. Harrington had directed two productions at the BACC and

had been trying to form her own theater company for several years. It was kismet. “We’d be doing (theater) anyway,” Harrington says. “With the Black Arts and Cultural Center, we’re working under an established nonprofit.” For its first season, Face Off is planning four shows, “consistent enough that (audiences) know we do regular theater,” Harrington says. The first, Been Lovin’ You — An Exploration of Black Love, was staged at the Epic Theatre, on the Kalamazoo Mall. A compilation of poetry, music and scenes from the plays of African-American playwright August Wilson, the one-night show drew about 150 attendees, according to Harrington. “People were really impressed by the quality of the show,” she says. “One of our goals was to showcase our training in acting, singing, even dancing.” Members of the Face Off theater company include, clockwise from left: Tanisha Pyron, Kendra Flourney, Janai Travis, Bianca Washington, Mickey Moses and Marissa Harrington.