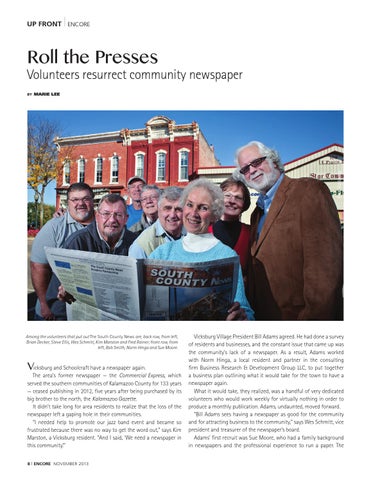 Vicksburg and Schoolcraft have a newspaper again.

The area’s former newspaper — the Commercial Express, which served the southern communities of Kalamazoo County for 133 years — ceased publishing in 2012, five years after being purchased by its big brother to the north, the Kalamazoo Gazette. It didn’t take long for area residents to realize that the loss of the newspaper left a gaping hole in their communities. “I needed help to promote our jazz band event and became so frustrated because there was no way to get the word out,” says Kim Marston, a Vicksburg resident. “And I said, ‘We need a newspaper in this community.’” 8 | Encore NOVEMBER 2013

Vicksburg Village President Bill Adams agreed. He had done a survey of residents and businesses, and the constant issue that came up was the community’s lack of a newspaper. As a result, Adams worked with Norm Hinga, a local resident and partner in the consulting firm Business Research &amp; Development Group LLC, to put together a business plan outlining what it would take for the town to have a newspaper again. What it would take, they realized, was a handful of very dedicated volunteers who would work weekly for virtually nothing in order to produce a monthly publication. Adams, undaunted, moved forward. “Bill Adams sees having a newspaper as good for the community and for attracting business to the community,” says Wes Schmitt, vice president and treasurer of the newspaper’s board. Adams’ first recruit was Sue Moore, who had a family background in newspapers and the professional experience to run a paper. The

Southwest Michigan's Magazine celebrating the great people, places and things in our corner of the Mitten.