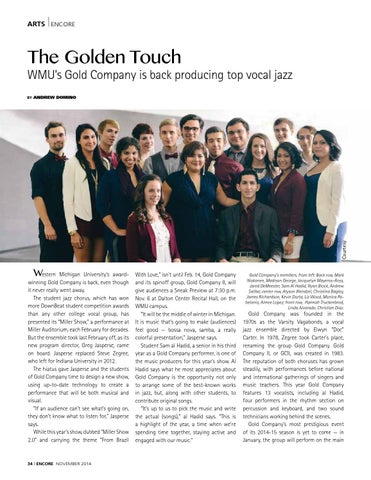 estern Michigan University’s awardwinning Gold Company is back, even though it never really went away. The student jazz chorus, which has won more DownBeat student competition awards than any other college vocal group, has presented its “Miller Show,” a performance at Miller Auditorium, each February for decades. But the ensemble took last February off, as its new program director, Greg Jasperse, came on board. Jasperse replaced Steve Zegree, who left for Indiana University in 2012. The hiatus gave Jasperse and the students of Gold Company time to design a new show, using up-to-date technology to create a performance that will be both musical and visual. “If an audience can’t see what’s going on, they don’t know what to listen for,” Jasperse says. While this year’s show, dubbed “Miller Show 2.0” and carrying the theme “From Brazil

With Love,” isn’t until Feb. 14, Gold Company and its spinoff group, Gold Company II, will give audiences a Sneak Preview at 7:30 p.m. Nov. 6 at Dalton Center Recital Hall, on the WMU campus. “It will be the middle of winter in Michigan. It is music that’s going to make (audiences) feel good — bossa nova, samba, a really colorful presentation,” Jasperse says. Student Sam al Hadid, a senior in his third year as a Gold Company performer, is one of the music producers for this year’s show. Al Hadid says what he most appreciates about Gold Company is the opportunity not only to arrange some of the best-known works in jazz, but, along with other students, to contribute original songs. “It’s up to us to pick the music and write the actual (songs),” al Hadid says. “This is a highlight of the year, a time when we’re spending time together, staying active and engaged with our music.”

Gold Company was founded in the 1970s as the Varsity Vagabonds, a vocal jazz ensemble directed by Elwyn “Doc” Carter. In 1978, Zegree took Carter’s place, renaming the group Gold Company. Gold Company II, or GCII, was created in 1983. The reputation of both choruses has grown steadily, with performances before national and international gatherings of singers and music teachers. This year Gold Company features 13 vocalists, including al Hadid, four performers in the rhythm section on percussion and keyboard, and two sound technicians working behind the scenes. Gold Company’s most prestigious event of its 2014-15 season is yet to come — in January, the group will perform on the main