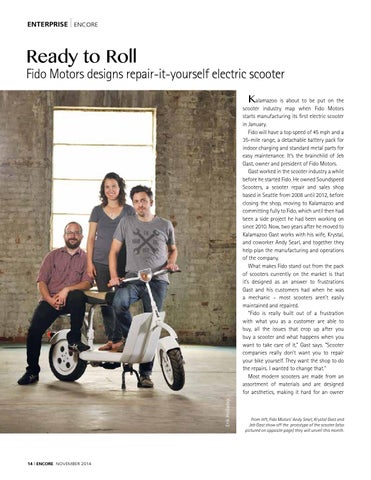 alamazoo is about to be put on the scooter industry map when Fido Motors starts manufacturing its first electric scooter in January. Fido will have a top speed of 45 mph and a 35-mile range, a detachable battery pack for indoor charging and standard metal parts for easy maintenance. It’s the brainchild of Jeb Gast, owner and president of Fido Motors. Gast worked in the scooter industry a while before he started Fido. He owned Soundspeed Scooters, a scooter repair and sales shop based in Seattle from 2008 until 2012, before closing the shop, moving to Kalamazoo and committing fully to Fido, which until then had been a side project he had been working on since 2010. Now, two years after he moved to Kalamazoo Gast works with his wife, Krystal, and coworker Andy Searl, and together they help plan the manufacturing and operations of the company. What makes Fido stand out from the pack of scooters currently on the market is that it’s designed as an answer to frustrations Gast and his customers had when he was a mechanic – most scooters aren’t easily maintained and repaired. “Fido is really built out of a frustration with what you as a customer are able to buy, all the issues that crop up after you buy a scooter and what happens when you want to take care of it,” Gast says. “Scooter companies really don’t want you to repair your bike yourself. They want the shop to do the repairs. I wanted to change that.” Most modern scooters are made from an assortment of materials and are designed for aesthetics, making it hard for an owner

From left, Fido Motors’ Andy Searl, Krystal Gast and Jeb Gast show off the prototype of the scooter (also pictured on opposite page) they will unveil this month.