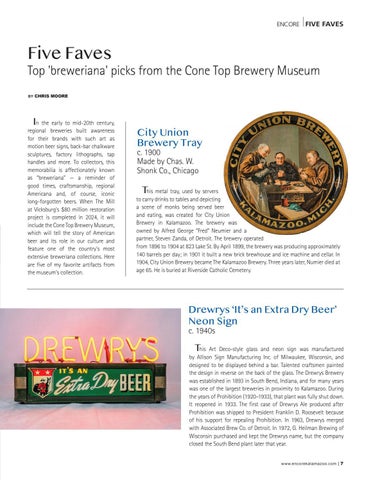 n the early to mid-20th century, regional breweries built awareness for their brands with such art as motion beer signs, back-bar chalkware sculptures, factory lithographs, tap handles and more. To collectors, this memorabilia is affectionately known as “breweriana” — a reminder of good times, craftsmanship, regional Americana and, of course, iconic long-forgotten beers. When The Mill at Vicksburg&#39;s $80 million restoration project is completed in 2024, it will include the Cone Top Brewery Museum, which will tell the story of American beer and its role in our culture and feature one of the country&#39;s most extensive breweriana collections. Here are five of my favorite artifacts from the museum&#39;s collection.

his metal tray, used by servers to carry drinks to tables and depicting a scene of monks being served beer and eating, was created for City Union Brewery in Kalamazoo. The brewery was owned by Alfred George “Fred” Neumier and a partner, Steven Zanda, of Detroit. The brewery operated from 1896 to 1904 at 823 Lake St. By April 1899, the brewery was producing approximately 140 barrels per day; in 1901 it built a new brick brewhouse and ice machine and cellar. In 1904, City Union Brewery became The Kalamazoo Brewery. Three years later, Numier died at age 65. He is buried at Riverside Catholic Cemetery.

Art Deco-style glass and neon sign was manufactured by Allison Sign Manufacturing Inc. of Milwaukee, Wisconsin, and designed to be displayed behind a bar. Talented craftsmen painted the design in reverse on the back of the glass. The Drewrys Brewery was established in 1893 in South Bend, Indiana, and for many years was one of the largest breweries in proximity to Kalamazoo. During the years of Prohibition (1920–1933), that plant was fully shut down. It reopened in 1933. The first case of Drewrys Ale produced after Prohibition was shipped to President Franklin D. Roosevelt because of his support for repealing Prohibition. In 1963, Drewrys merged with Associated Brew Co. of Detroit. In 1972, G. Heilman Brewing of Wisconsin purchased and kept the Drewrys name, but the company closed the South Bend plant later that year. w w w.encorekalamazoo.com | 7