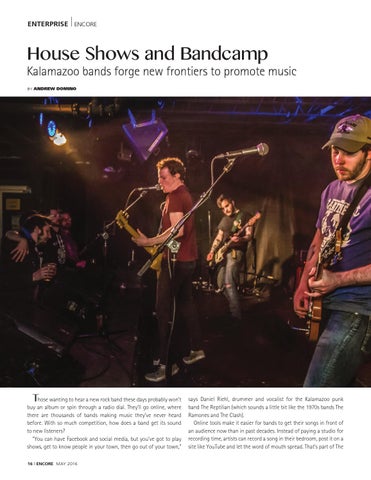 hose wanting to hear a new rock band these days probably won’t buy an album or spin through a radio dial. They’ll go online, where there are thousands of bands making music they’ve never heard before. With so much competition, how does a band get its sound to new listeners? “You can have Facebook and social media, but you’ve got to play shows, get to know people in your town, then go out of your town,” 16 | ENCORE MAY 2016

says Daniel Riehl, drummer and vocalist for the Kalamazoo punk band The Reptilian (which sounds a little bit like the 1970s bands The Ramones and The Clash). Online tools make it easier for bands to get their songs in front of an audience now than in past decades. Instead of paying a studio for recording time, artists can record a song in their bedroom, post it on a site like YouTube and let the word of mouth spread. That’s part of The