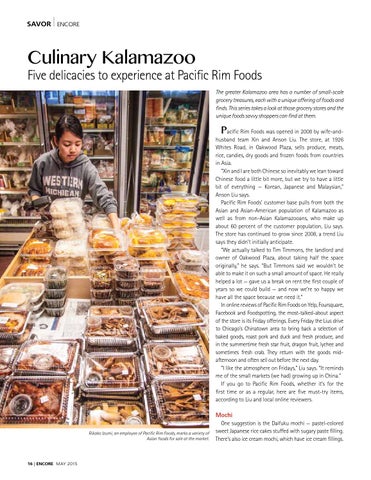 Five delicacies to experience at Pacific Rim Foods The greater Kalamazoo area has a number of small-scale grocery treasures, each with a unique offering of foods and finds. This series takes a look at those grocery stores and the unique foods savvy shoppers can find at them.

Rikako Izumi, an employee of Pacific Rim Foods, marks a variety of Asian foods for sale at the market.

acific Rim Foods was opened in 2008 by wife-andhusband team Xin and Anson Liu. The store, at 1926 Whites Road, in Oakwood Plaza, sells produce, meats, rice, candies, dry goods and frozen foods from countries in Asia. “Xin and I are both Chinese so inevitably we lean toward Chinese food a little bit more, but we try to have a little bit of everything — Korean, Japanese and Malaysian,” Anson Liu says. Pacific Rim Foods’ customer base pulls from both the Asian and Asian-American population of Kalamazoo as well as from non-Asian Kalamazooans, who make up about 60 percent of the customer population, Liu says. The store has continued to grow since 2008, a trend Liu says they didn’t initially anticipate. “We actually talked to Tim Timmons, the landlord and owner of Oakwood Plaza, about taking half the space originally,” he says. “But Timmons said we wouldn’t be able to make it on such a small amount of space. He really helped a lot — gave us a break on rent the first couple of years so we could build — and now we’re so happy we have all the space because we need it.” In online reviews of Pacific Rim Foods on Yelp, Foursquare, Facebook and Foodspotting, the most-talked-about aspect of the store is its Friday offerings. Every Friday the Lius drive to Chicago’s Chinatown area to bring back a selection of baked goods, roast pork and duck and fresh produce, and in the summertime fresh star fruit, dragon fruit, lychee and sometimes fresh crab. They return with the goods midafternoon and often sell out before the next day. “I like the atmosphere on Fridays,” Liu says. “It reminds me of the small markets (we had) growing up in China.” If you go to Pacific Rim Foods, whether it’s for the first time or as a regular, here are five must-try items, according to Liu and local online reviewers.