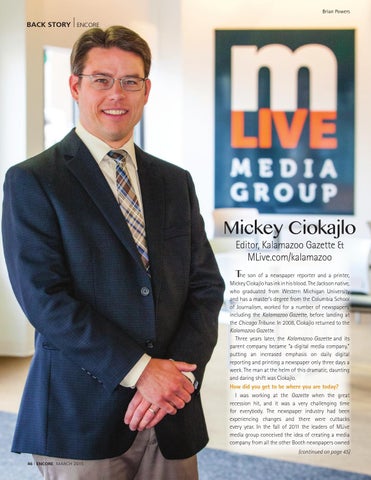 he son of a newspaper reporter and a printer, Mickey Ciokajlo has ink in his blood. The Jackson native, who graduated from Western Michigan University and has a master’s degree from the Columbia School of Journalism, worked for a number of newspapers, including the Kalamazoo Gazette, before landing at the Chicago Tribune. In 2008, Ciokajlo returned to the Kalamazoo Gazette. Three years later, the Kalamazoo Gazette and its parent company became “a digital media company,” putting an increased emphasis on daily digital reporting and printing a newspaper only three days a week. The man at the helm of this dramatic, daunting and daring shift was Ciokajlo. How did you get to be where you are today? I was working at the Gazette when the great recession hit, and it was a very challenging time for everybody. The newspaper industry had been experiencing changes and there were cutbacks every year. In the fall of 2011 the leaders of MLive media group conceived the idea of creating a media company from all the other Booth newspapers owned (continued on page 45) 46 | Encore MARCH 2015

Is Tech Ed poised for a comeback in SW Michigan? What's in a gumbo, anyway? Why dancing can help students learn to read, a vinyl revival in the Vine neighborhood, Fretboard Fest, and more in SW MIchigan's Magazine!