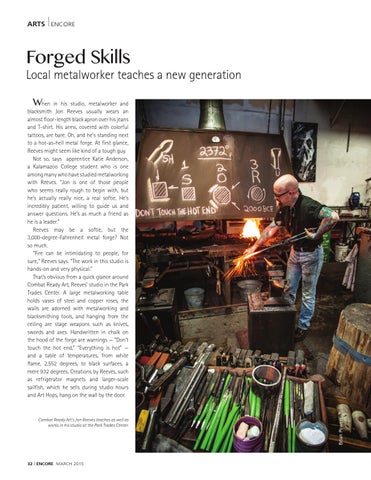 Combat Ready Art’s Jon Reeves teaches as well as works in his studio at the Park Trades Center.

hen in his studio, metalworker and blacksmith Jon Reeves usually wears an almost floor-length black apron over his jeans and T-shirt. His arms, covered with colorful tattoos, are bare. Oh, and he’s standing next to a hot-as-hell metal forge. At first glance, Reeves might seem like kind of a tough guy. Not so, says apprentice Katie Anderson, a Kalamazoo College student who is one among many who have studied metalworking with Reeves. “Jon is one of those people who seems really rough to begin with, but he’s actually really nice, a real softie. He’s incredibly patient, willing to guide us and answer questions. He’s as much a friend as he is a leader.” Reeves may be a softie, but the 3,000-degree-Fahrenheit metal forge? Not so much. “Fire can be intimidating to people, for sure,” Reeves says. “The work in this studio is hands-on and very physical.” That’s obvious from a quick glance around Combat Ready Art, Reeves’ studio in the Park Trades Center. A large metalworking table holds vases of steel and copper roses, the walls are adorned with metalworking and blacksmithing tools, and hanging from the ceiling are stage weapons such as knives, swords and axes. Handwritten in chalk on the hood of the forge are warnings — “Don’t touch the hot end,” “Everything is hot” — and a table of temperatures, from white flame, 2,552 degrees, to black surfaces, a mere 932 degrees. Creations by Reeves, such as refrigerator magnets and larger-scale sailfish, which he sells during studio hours and Art Hops, hang on the wall by the door.

Is Tech Ed poised for a comeback in SW Michigan? What's in a gumbo, anyway? Why dancing can help students learn to read, a vinyl revival in the Vine neighborhood, Fretboard Fest, and more in SW MIchigan's Magazine!