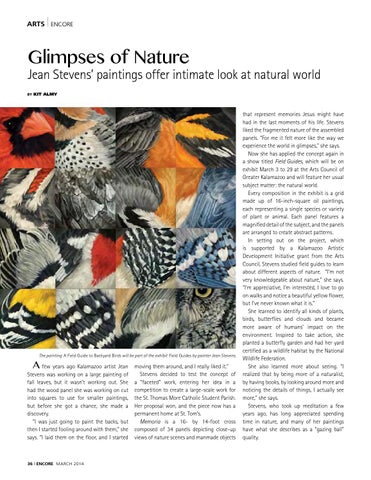 The painting A Field Guide to Backyard Birds will be part of the exhibit Field Guides by painter Jean Stevens.

Stevens was working on a large painting of fall leaves, but it wasn’t working out. She had the wood panel she was working on cut into squares to use for smaller paintings, but before she got a chance, she made a discovery. “I was just going to paint the backs, but then I started fooling around with them,” she says. “I laid them on the floor, and I started

moving them around, and I really liked it.” Stevens decided to test the concept of a “faceted” work, entering her idea in a competition to create a large-scale work for the St. Thomas More Catholic Student Parish. Her proposal won, and the piece now has a permanent home at St. Tom’s. Memoria is a 16- by 14-foot cross composed of 34 panels depicting close-up views of nature scenes and manmade objects

that represent memories Jesus might have had in the last moments of his life. Stevens liked the fragmented nature of the assembled panels. “For me it felt more like the way we experience the world in glimpses,” she says. Now she has applied the concept again in a show titled Field Guides, which will be on exhibit March 3 to 29 at the Arts Council of Greater Kalamazoo and will feature her usual subject matter: the natural world. Every composition in the exhibit is a grid made up of 16-inch-square oil paintings, each representing a single species or variety of plant or animal. Each panel features a magnified detail of the subject, and the panels are arranged to create abstract patterns. In setting out on the project, which is supported by a Kalamazoo Artistic Development Initiative grant from the Arts Council, Stevens studied field guides to learn about different aspects of nature. “I’m not very knowledgeable about nature,” she says. “I’m appreciative, I’m interested, I love to go on walks and notice a beautiful yellow flower, but I’ve never known what it is.” She learned to identify all kinds of plants, birds, butterflies and clouds and became more aware of humans’ impact on the environment. Inspired to take action, she planted a butterfly garden and had her yard certified as a wildlife habitat by the National Wildlife Federation. She also learned more about seeing. “I realized that by being more of a naturalist, by having books, by looking around more and noticing the details of things, I actually see more,” she says. Stevens, who took up meditation a few years ago, has long appreciated spending time in nature, and many of her paintings have what she describes as a “gazing ball” quality.

Southwest Michigan's Magazine -- celebrating the great things, people and places found in our corner of the Mitten.

Southwest Michigan's Magazine -- celebrating the great things, people and places found in our corner of the Mitten.