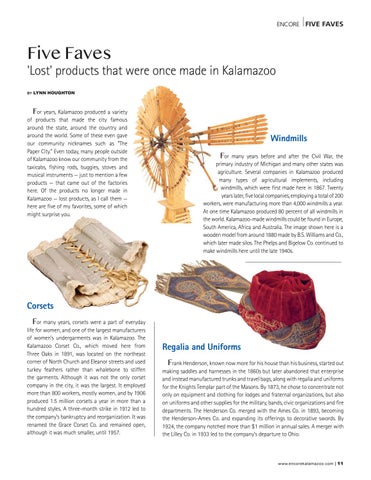 'Lost' products that were once made in Kalamazoo by

For years, Kalamazoo produced a variety

of products that made the city famous around the state, around the country and around the world. Some of these even gave our community nicknames such as “The Paper City.” Even today, many people outside of Kalamazoo know our community from the taxicabs, fishing rods, buggies, stoves and musical instruments — just to mention a few products — that came out of the factories here. Of the products no longer made in Kalamazoo — lost products, as I call them — here are five of my favorites, some of which might surprise you.

Windmills For many years before and after the Civil War, the primary industry of Michigan and many other states was agriculture. Several companies in Kalamazoo produced many types of agricultural implements, including windmills, which were first made here in 1867. Twenty years later, five local companies, employing a total of 200 workers, were manufacturing more than 4,000 windmills a year. At one time Kalamazoo produced 80 percent of all windmills in the world. Kalamazoo-made windmills could be found in Europe, South America, Africa and Australia. The image shown here is a wooden model from around 1880 made by B.S. Williams and Co., which later made silos. The Phelps and Bigelow Co. continued to make windmills here until the late 1940s.

Corsets For many years, corsets were a part of everyday life for women, and one of the largest manufacturers of women’s undergarments was in Kalamazoo. The Kalamazoo Corset Co., which moved here from Three Oaks in 1891, was located on the northeast corner of North Church and Eleanor streets and used turkey feathers rather than whalebone to stiffen the garments. Although it was not the only corset company in the city, it was the largest. It employed more than 800 workers, mostly women, and by 1906 produced 1.5 million corsets a year in more than a hundred styles. A three-month strike in 1912 led to the company’s bankruptcy and reorganization. It was renamed the Grace Corset Co. and remained open, although it was much smaller, until 1957.

Regalia and Uniforms Frank Henderson, known now more for his house than his business, started out making saddles and harnesses in the 1860s but later abandoned that enterprise and instead manufactured trunks and travel bags, along with regalia and uniforms for the Knights Templar part of the Masons. By 1873, he chose to concentrate not only on equipment and clothing for lodges and fraternal organizations, but also on uniforms and other supplies for the military, bands, civic organizations and fire departments. The Henderson Co. merged with the Ames Co. in 1893, becoming the Henderson-Ames Co. and expanding its offerings to decorative swords. By 1924, the company notched more than $1 million in annual sales. A merger with the Lilley Co. in 1933 led to the company’s departure to Ohio.