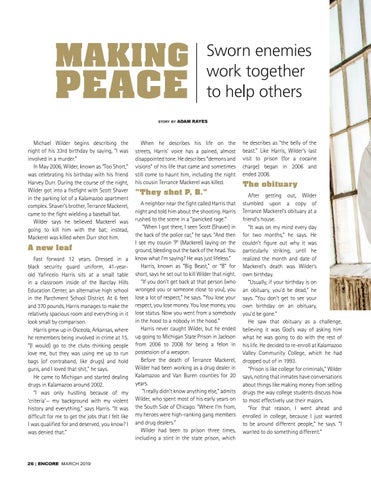 Michael Wilder begins describing the night of his 33rd birthday by saying, “I was involved in a murder.” In May 2006, Wilder, known as “Too Short,” was celebrating his birthday with his friend Harvey Durr. During the course of the night, Wilder got into a fistfight with Scott Shaver in the parking lot of a Kalamazoo apartment complex. Shaver’s brother, Terrance Mackerel, came to the fight wielding a baseball bat. Wilder says he believed Mackerel was going to kill him with the bat; instead, Mackerel was killed when Durr shot him.

A new leaf Fast forward 12 years. Dressed in a black security guard uniform, 41-yearold Yafinceio Harris sits at a small table in a classroom inside of the Barclay Hills Education Center, an alternative high school in the Parchment School District. At 6 feet and 370 pounds, Harris manages to make the relatively spacious room and everything in it look small by comparison. Harris grew up in Osceola, Arkansas, where he remembers being involved in crime at 15. “(I would) go to the clubs thinking people love me, but they was using me up to run bags (of contraband, like drugs) and hold guns, and I loved that shit,” he says. He came to Michigan and started dealing drugs in Kalamazoo around 2002. “I was only hustling because of my ‘criteria’— my background with my violent history and everything,” says Harris. “It was difficult for me to get the jobs that I felt like I was qualified for and deserved, you know? I was denied that.”

Sworn enemies work together to help others

When he describes his life on the streets, Harris’ voice has a pained, almost disappointed tone. He describes “demons and visions” of his life that came and sometimes still come to haunt him, including the night his cousin Terrance Mackerel was killed.

&quot;They shot P, B.&quot; A neighbor near the fight called Harris that night and told him about the shooting. Harris rushed to the scene in a “panicked rage.” “When I got there, I seen Scott (Shaver) in the back of the police car,” he says. “And then I see my cousin &#39;P&#39; (Mackerel) laying on the ground, bleeding out the back of the head. You know what I&#39;m saying? He was just lifeless.” Harris, known as “Big Beast,” or “B” for short, says he set out to kill Wilder that night. “If you don&#39;t get back at that person (who wronged you or someone close to you), you lose a lot of respect,” he says. “You lose your respect, you lose money. You lose money, you lose status. Now you went from a somebody in the hood to a nobody in the hood.” Harris never caught Wilder, but he ended up going to Michigan State Prison in Jackson from 2006 to 2008 for being a felon in possession of a weapon. Before the death of Terrance Mackerel, Wilder had been working as a drug dealer in Kalamazoo and Van Buren counties for 20 years. “I really didn’t know anything else,” admits Wilder, who spent most of his early years on the South Side of Chicago. “Where I’m from, my heroes were high-ranking gang members and drug dealers.” Wilder had been to prison three times, including a stint in the state prison, which

he describes as “the belly of the beast.” Like Harris, Wilder’s last visit to prison (for a cocaine charge) began in 2006 and ended 2008.

The obituary After getting out, Wilder stumbled upon a copy of Terrance Mackerel’s obituary at a friend&#39;s house. “It was on my mind every day for two months,” he says. He couldn&#39;t figure out why it was particularly striking, until he realized the month and date of Mackerel&#39;s death was Wilder&#39;s own birthday. “Usually, if your birthday is on an obituary, you’d be dead,” he says. “You don’t get to see your own birthday on an obituary, you’d be gone.” He saw that obituary as a challenge, believing it was God’s way of asking him what he was going to do with the rest of his life. He decided to re-enroll at Kalamazoo Valley Community College, which he had dropped out of in 1993. “Prison is like college for criminals,” Wilder says, noting that inmates have conversations about things like making money from selling drugs the way college students discuss how to most effectively use their majors. “For that reason, I went ahead and enrolled in college, because I just wanted to be around different people,” he says. “I wanted to do something different.”