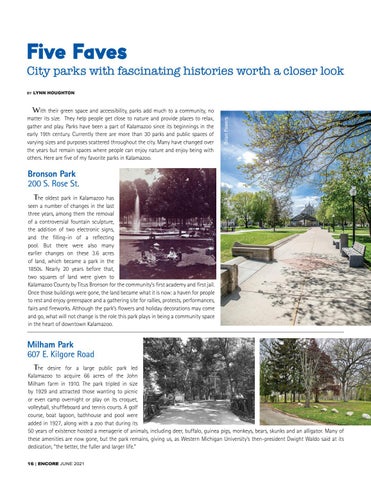 With their green space and accessibility, parks add much to a community, no matter its size. They help people get close to nature and provide places to relax, gather and play. Parks have been a part of Kalamazoo since its beginnings in the early 19th century. Currently there are more than 30 parks and public spaces of varying sizes and purposes scattered throughout the city. Many have changed over the years but remain spaces where people can enjoy nature and enjoy being with others. Here are five of my favorite parks in Kalamazoo.

Bronson Park 200 S. Rose St. The oldest park in Kalamazoo has seen a number of changes in the last three years, among them the removal of a controversial fountain sculpture, the addition of two electronic signs, and the filling-in of a reflecting pool. But there were also many earlier changes on these 3.6 acres of land, which became a park in the 1850s. Nearly 20 years before that, two squares of land were given to Kalamazoo County by Titus Bronson for the community’s first academy and first jail. Once those buildings were gone, the land became what it is now: a haven for people to rest and enjoy greenspace and a gathering site for rallies, protests, performances, fairs and fireworks. Although the park’s flowers and holiday decorations may come and go, what will not change is the role this park plays in being a community space in the heart of downtown Kalamazoo.

Milham Park 607 E. Kilgore Road The desire for a large public park led Kalamazoo to acquire 66 acres of the John Milham farm in 1910. The park tripled in size by 1929 and attracted those wanting to picnic or even camp overnight or play on its croquet, volleyball, shuffleboard and tennis courts. A golf course, boat lagoon, bathhouse and pool were added in 1927, along with a zoo that during its 50 years of existence hosted a menagerie of animals, including deer, buffalo, guinea pigs, monkeys, bears, skunks and an alligator. Many of these amenities are now gone, but the park remains, giving us, as Western Michigan University’s then-president Dwight Waldo said at its dedication, “the better, the fuller and larger life.” 16 | ENCORE JUNE 2021

Southwest Michigan Magazine: See Your Town Like a Tourist issue invites you to discover the world hidden in plain sight, City parks with fascinating histories, discover hidden treasures around town, Doing good is a great way to see wild spaces, The Gavan brothers are at the core of Guitar Up!'s retro, upbeat sound, Meet Jane Ghosh the Discover Kalamazoo CEO and much much more.