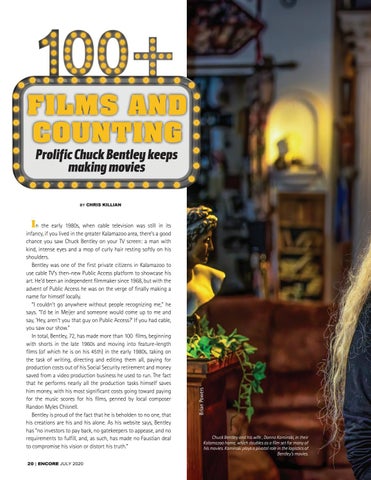 infancy, if you lived in the greater Kalamazoo area, there’s a good chance you saw Chuck Bentley on your TV screen: a man with kind, intense eyes and a mop of curly hair resting softly on his shoulders. Bentley was one of the first private citizens in Kalamazoo to use cable TV’s then-new Public Access platform to showcase his art. He’d been an independent filmmaker since 1968, but with the advent of Public Access he was on the verge of finally making a name for himself locally. “I couldn’t go anywhere without people recognizing me,” he says. “I’d be in Meijer and someone would come up to me and say, ‘Hey, aren’t you that guy on Public Access?’ If you had cable, you saw our show.” In total, Bentley, 72, has made more than 100 films, beginning with shorts in the late 1960s and moving into feature-length films (of which he is on his 45th) in the early 1980s, taking on the task of writing, directing and editing them all, paying for production costs out of his Social Security retirement and money saved from a video production business he used to run. The fact that he performs nearly all the production tasks himself saves him money, with his most significant costs going toward paying for the music scores for his films, penned by local composer Randon Myles Chisnell. Bentley is proud of the fact that he is beholden to no one, that his creations are his and his alone. As his website says, Bentley has “no investors to pay back, no gatekeepers to appease, and no requirements to fulfill, and, as such, has made no Faustian deal to compromise his vision or distort his truth.” 20 | ENCORE JULY 2020

In the early 1980s, when cable television was still in its

Chuck Bentley and his wife , Donna Kaminski, in their Kalamazoo home, which doubles as a film set for many of his movies. Kaminski plays a pivotal role in the logistics of Bentley’s movies.