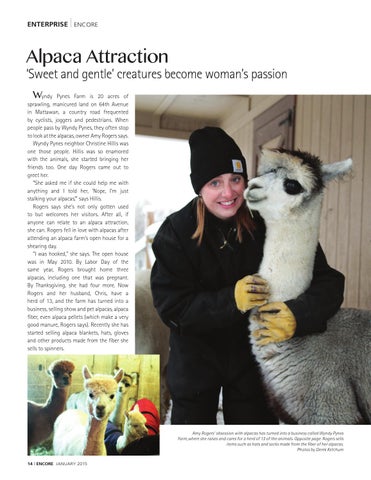 yndy Pynes Farm is 20 acres of sprawling, manicured land on 64th Avenue in Mattawan, a country road frequented by cyclists, joggers and pedestrians. When people pass by Wyndy Pynes, they often stop to look at the alpacas, owner Amy Rogers says. Wyndy Pynes neighbor Christine Hillis was one those people. Hillis was so enamored with the animals, she started bringing her friends too. One day Rogers came out to greet her. “She asked me if she could help me with anything and I told her, ‘Nope, I’m just stalking your alpacas,’” says Hillis. Rogers says she’s not only gotten used to but welcomes her visitors. After all, if anyone can relate to an alpaca attraction, she can. Rogers fell in love with alpacas after attending an alpaca farm’s open house for a shearing day. “I was hooked,” she says. The open house was in May 2010. By Labor Day of the same year, Rogers brought home three alpacas, including one that was pregnant. By Thanksgiving, she had four more. Now Rogers and her husband, Chris, have a herd of 13, and the farm has turned into a business, selling show and pet alpacas, alpaca fiber, even alpaca pellets (which make a very good manure, Rogers says). Recently she has started selling alpaca blankets, hats, gloves and other products made from the fiber she sells to spinners.

Amy Rogers’ obsession with alpacas has turned into a business called Wyndy Pynes Farm,where she raises and cares for a herd of 13 of the animals. Opposite page: Rogers sells items such as hats and socks made from the fiber of her alpacas. Photos by Derek Ketchum 14 | Encore JANUARY 2015