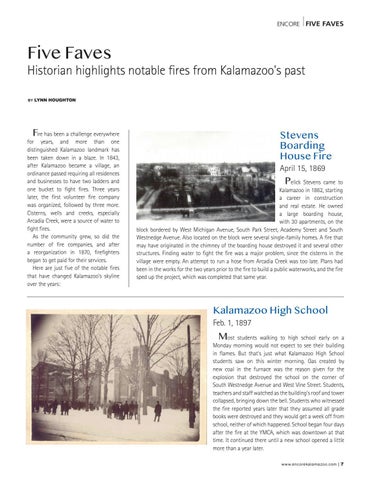 Historian highlights notable fires from Kalamazoo&#39;s past BY LYNN HOUGHTON

ire has been a challenge everywhere for years, and more than one distinguished Kalamazoo landmark has been taken down in a blaze. In 1843, after Kalamazoo became a village, an ordinance passed requiring all residences and businesses to have two ladders and one bucket to fight fires. Three years later, the first volunteer fire company was organized, followed by three more. Cisterns, wells and creeks, especially Arcadia Creek, were a source of water to fight fires. As the community grew, so did the number of fire companies, and after a reorganization in 1870, firefighters began to get paid for their services. Here are just five of the notable fires that have changed Kalamazoo&#39;s skyline over the years:

elick Stevens came to Kalamazoo in 1862, starting a career in construction and real estate. He owned a large boarding house, with 30 apartments, on the block bordered by West Michigan Avenue, South Park Street, Academy Street and South Westnedge Avenue. Also located on the block were several single-family homes. A fire that may have originated in the chimney of the boarding house destroyed it and several other structures. Finding water to fight the fire was a major problem, since the cisterns in the village were empty. An attempt to run a hose from Arcadia Creek was too late. Plans had been in the works for the two years prior to the fire to build a public waterworks, and the fire sped up the project, which was completed that same year.

ost students walking to high school early on a Monday morning would not expect to see their building in flames. But that&#39;s just what Kalamazoo High School students saw on this winter morning. Gas created by new coal in the furnace was the reason given for the explosion that destroyed the school on the corner of South Westnedge Avenue and West Vine Street. Students, teachers and staff watched as the building&#39;s roof and tower collapsed, bringing down the bell. Students who witnessed the fire reported years later that they assumed all grade books were destroyed and they would get a week off from school, neither of which happened. School began four days after the fire at the YMCA, which was downtown at that time. It continued there until a new school opened a little more than a year later. w w w.encorekalamazoo.com | 7

Southwest Michigan's Magazine: KVCC's president L. Marshall Washington invokes his passion for community and superheros in his leadership; Foster kids co-author book and build a business to help others defy the odds; How local theater companies are keeping actors and audiences safe in the era of Covid-19; Meet Lia Gaggino who's podcast is spurring conversations about kids' mental and behavioral health, an extended arts section, events of note and much more.