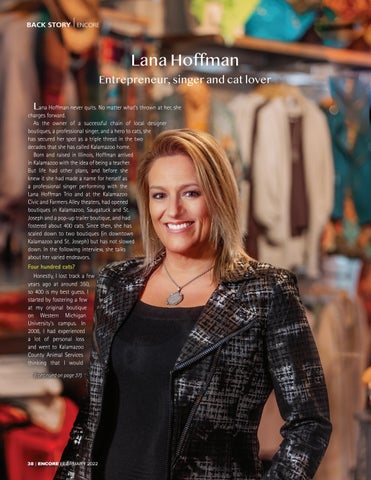 ana Hoffman never quits. No matter what’s thrown at her, she charges forward. As the owner of a successful chain of local designer boutiques, a professional singer, and a hero to cats, she has secured her spot as a triple threat in the two decades that she has called Kalamazoo home. Born and raised in Illinois, Hoffman arrived in Kalamazoo with the idea of being a teacher. But life had other plans, and before she knew it she had made a name for herself as a professional singer performing with the Lana Hoffman Trio and at the Kalamazoo Civic and Farmers Alley theaters, had opened boutiques in Kalamazoo, Saugatuck and St. Joseph and a pop-up trailer boutique, and had fostered about 400 cats. Since then, she has scaled down to two boutiques (in downtown Kalamazoo and St. Joseph) but has not slowed down. In the following interview, she talks about her varied endeavors. Four hundred cats? Honestly, I lost track a few years ago at around 350, so 400 is my best guess. I started by fostering a few at my original boutique on Western Michigan University&#39;s campus. In 2008, I had experienced a lot of personal loss and went to Kalamazoo County Animal Services thinking that I would (continued on page 37)

Southwest Michigan's Magazine: After their father, Brent Hook, was shot, his kids bonded to put him on the road to recovery; Refurbished Pets teams up with inmates to give dogs and the incarcerated new skills; RAD Fest Returns; Meet Lana Hoffman, she's an entrepreneur, professional singer and fosterer of 400 cats, Events of Note, extended arts section, and so much more.

"News as it should be" by Jennifer Clark