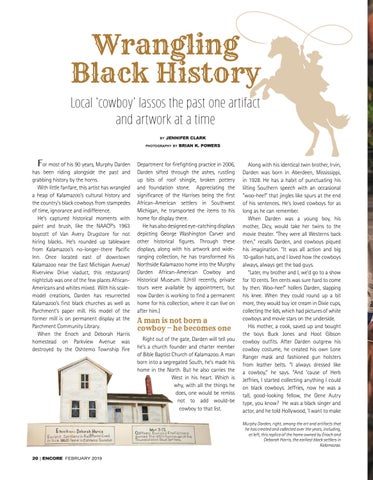 or most of his 90 years, Murphy Darden has been riding alongside the past and grabbing history by the horns. With little fanfare, this artist has wrangled a heap of Kalamazoo’s cultural history and the country’s black cowboys from stampedes of time, ignorance and indifference. He’s captured historical moments with paint and brush, like the NAACP’s 1963 boycott of Van Avery Drugstore for not hiring blacks.. He’s rounded up tableware from Kalamazoo’s no-longer-there Pacific Inn. Once located east of downtown Kalamazoo near the East Michigan Avenue/ Riverview Drive viaduct, this restaurant/ nightclub was one of the few places AfricanAmericans and whites mixed. With his scalemodel creations, Darden has resurrected Kalamazoo’s first black churches as well as Parchment’s paper mill. His model of the former mill is on permanent display at the Parchment Community Library. When the Enoch and Deborah Harris homestead on Parkview Avenue was destroyed by the Oshtemo Township Fire

Department for firefighting practice in 2006, Darden sifted through the ashes, rustling up bits of roof shingle, broken pottery and foundation stone. Appreciating the significance of the Harrises being the first African-American settlers in Southwest Michigan, he transported the items to his home for display there. He has also designed eye-catching displays depicting George Washington Carver and other historical figures. Through these displays, along with his artwork and wideranging collection, he has transformed his Northside Kalamazoo home into the Murphy Darden African-American Cowboy and Historical Museum. (Until recently, private tours were available by appointment, but now Darden is working to find a permanent home for his collection, where it can live on after him.)

A man is not born a cowboy — he becomes one Right out of the gate, Darden will tell you he’s a church founder and charter member of Bible Baptist Church of Kalamazoo. A man born into a segregated South, he’s made his home in the North. But he also carries the West in his heart. Which is why, with all the things he does, one would be remiss not to add would-be cowboy to that list.

Along with his identical twin brother, Irvin, Darden was born in Aberdeen, Mississippi, in 1928. He has a habit of punctuating his lilting Southern speech with an occasional “woo-hee!” that jingles like spurs at the end of his sentences. He’s loved cowboys for as long as he can remember. When Darden was a young boy, his mother, Dicy, would take her twins to the movie theater. “They were all Westerns back then,” recalls Darden, and cowboys piqued his imagination. “It was all action and big 10-gallon hats, and I loved how the cowboys always, always get the bad guys. “Later, my brother and I, we’d go to a show for 10 cents. Ten cents was sure hard to come by then. Woo-hee!” hollers Darden, slapping his knee. When they could round up a bit more, they would buy ice cream in Dixie cups, collecting the lids, which had pictures of white cowboys and movie stars on the underside. His mother, a cook, saved up and bought the boys Buck Jones and Hoot Gibson cowboy outfits. After Darden outgrew his cowboy costume, he created his own Lone Ranger mask and fashioned gun holsters from leather belts. “I always dressed like a cowboy,” he says. “And ’cause of Herb Jeffries, I started collecting anything I could on black cowboys. Jeffries, now he was a tall, good-looking fellow, the Gene Autry type, you know? He was a black singer and actor, and he told Hollywood, ‘I want to make Murphy Darden, right, among the art and artifacts that he has created and collected over the years, including, at left, this replica of the home owned by Enoch and Deborah Harris, the earliest black settlers in Kalamazoo.